Endometriosis Awareness Month 2021: What Is Endometriosis and How Does it Affect Your Menstrual Cycle? 5 Facts About the Painful Condition That You Should Know Of

Globally, about 17.6 million suffer from Endometriosis and around 2.6 million women in India alone suffer from painful disease. The unbearably distressing disease is known to affect the daily lives of women in innumerable ways. Endometriosis is a disorder in which tissue resembling the lining of the uterus begins to develop outside the uterine cavity. 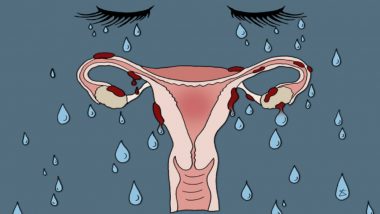 Endometriosis is a health condition that affects the uterus in which endometrial tissue starts growing abnormally and spreads out of the uterus. Sometimes the endometrium layer also extends to the ovaries, intestines and other reproductive organs besides the outer layer of the uterus. Endometriosis can affect the fallopian tubes, ovaries, lymph nodes, and peritoneum. Usually, the endometrial tissues present in the uterus pass out during menstruation. If they become large, then they affect the functioning of the body. This problem is not due to an infection but due to a deficiency in the immune system of the body.

How Does Endometriosis  Affect Your Menstrual Cycle?

For people with endometriosis, with every menstrual period, the layer of this tissue grows in other organs and it cannot get out because the passage is blocked by a thick layer of tissue. It then becomes the cause of unbearable pain. There is unbearable pain during menstruation due to endometriosis. Prolonged pain in the pelvic area, fatigue, pain during or after sex, an excessive amount of bleeding during menstruation and infertility are some of the difficulties women with endometriosis have to face. Most of the women come to know about this disease later in life. Endometriosis Symptoms, Causes and Early Signs.

5 Facts About the Painful Condition, Endometriosis

Researchers have attributed the disease to the body's immune system, heredity, early menstruation, infertility and prolonged menstruation that can last up to seven days. According to some researchers, endometriosis can be caused by the inverted flow of menstrual blood into the fallopian tubes and pelvis.

(The above story first appeared on LatestLY on Mar 03, 2021 03:06 PM IST. For more news and updates on politics, world, sports, entertainment and lifestyle, log on to our website latestly.com).