Is Something Hot Brewing Between NBA Player Patrick Beverly and The Socialite From Dubai Mandana Bolourchi?

Both of them are seen as the best hot thing in town right now, as their pictures go viral 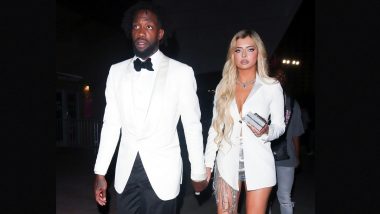 Patrick Beverly and The Socialite
Recently photos have come out of the two in Las Vegas. Patrick Beverly, NBA Clippers player who, other than his incredible games, also garnered headlines this time with seeing with someone special. People saw him with someone new, and everyone started speculating about them being together.
It was discovered from the talented NBA player's most recent Instagram post that his new significant other is none other than the socialite/philanthropist, Mandana Bolourchi.
These photos with Mandana Balourchi caused many turned heads. Both of them brought in his birthday weekend in Las Vegas and attended the McGregor vs Poirier fight. Talking about this season, though it did not turn out in his favour, it was a huge season for him. However, he does not seem too down about the game from what we saw as the picture surfaced on the web, with festivity mode on for his birthday. Also, Patrick Beverly is going into the last year of his contract with the Los Angeles Clippers. Many are looking forward to know where the future takes him.
Patrick Beverly and Mandana Bolourchi shared many pictures of the fun, frolic and glamorous weekend getaway they enjoyed with their friends. The touted seemingly couple brimmed with joy and thoroughly enjoyed the celebrations, which was quite evident from the pictures. Patrick Beverly looked like he was enjoying and living his best life and was quite unbothered about the downfalls of the playoffs.
Comments
Tags:
NBA Player Patrick Beverly The Socialite
Comments
You might also like