African Man Dies of ‘Extreme Orgasm’ While With a Sex Worker! Know More About How Excessively Intense Climax Can Affect Your Health and Even Cause 'Brain to Rupture'

Death because of too much sex? Yes, it is possible and the most recent example is this African man who died because of ‘extreme orgasm’ as per the post-mortem while he was with a sex worker. The 35-year-old, named Charles Majawa, lost consciousness after having sex and died soon afterwards. 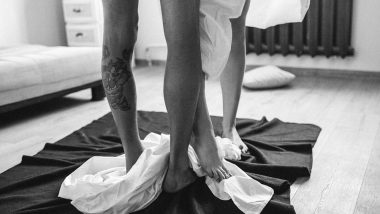 Death because of too much sex? Yes, it is possible and the most recent example is this case of an African man who died because of "extreme orgasm" as per the post-mortem while he was with a sex worker. The 35-year-old, named Charles Majawa, lost consciousness after having sex and died soon afterwards. Although health experts have said time and again that there is no alternative to sex and that it has immense health benefits. It is said to bring the intensity and sexual pleasure in interpersonal relationship. As much as it gives happiness to a person physically, it is also said to increase self-esteem.

But what happened in Falambi, Malawi, Southeast Africa, has undoubtedly shocked people. The young man fell in the lap of death shortly after ejaculating recklessly after having intercourse reportedly with a sex worker. According to the reports, he chose a partner for one night from a brothel and then brought her to a hotel. Majawa rented a hotel room for the night and the sex worker told the police that after ejaculation, Majawa fainted.

According to the statement, at first, the sex worker did not understand exactly what happened! She thought- Mazawa was tired and has fallen asleep, however soon she realized that Majawa is dead. Frightened by the incident, the sex worker first called her colleagues and after consulting with them, she informed the police. According to the news, a policeman reached the hotel with an examiner from Migoyi Health Center. The police recorded the statement of the sex worker. Initial tests showed that "excessive orgasm" was the cause of Mazawa's death.

Majawa's body was sent to the morgue for an autopsy and it was revealed that Majawa's heart rate rose rapidly due to reckless sexual intercourse. In addition, the blood vessels had swollen up and pushed into the brain. He died of a brain haemorrhage. The police have acquitted the prostitute in the incident. Majawa's body was sent to his village home, Matepway, for final burial.

Meanwhile, a study has suggested that having sex at least once a week actually halves the risk of early death and lower odds of dying from cancer, heart disease and other illnesses. They say a workout between the sheets is equivalent to “moderate-intensity” exercise and has similar health benefits.

Last year in June, a 35-year-old British man was left with a strong erection for nine consecutive days. This happened following a minor accident and reports said that he damaged his penis after he fell off his moped and hurting his perineum. Another case from India that made its way to the BMJ Case Reports was of a 52-year-old who had to have the tip of his penis amputated after he went to a hospital in the north of India with a 2-day long and painful erection.

(The above story first appeared on LatestLY on Jan 27, 2021 08:40 PM IST. For more news and updates on politics, world, sports, entertainment and lifestyle, log on to our website latestly.com).