'123456' Tops 2020 List of Most Common Passwords That Can be Cracked in Less Than a Second; Check Top 20 Worst Passwords of The Year

'123456' has been the most commonly used password in 2020. An annual report by password manager NordPass has revealed that millions of people are using '123456' as their password and it has been breached more than 23 million times. It takes only less than a second to crack the code. Find the list of 20 worst passwords used in 2020. 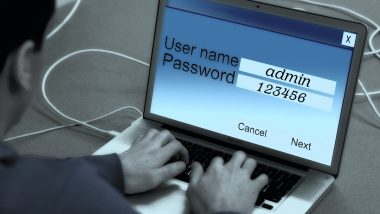 An annual report by password manager NordPass has revealed that '123456' has been the most commonly used password in 2020. The reports state that the password has been used by millions of people and has been breached more than 23 million times. It takes only less than a second to crack the code. The list includes the 200 worst passwords of the year and details of how many times they have been exposed, used and the time taken to crack it. The second most used password is '12345678' and the third spot goes to 'picture1'. How to Protect a Word Document With Password.

A software firm in their 2015 report had also revealed that '123456' was in the top among the list of worst passwords of the year followed by the word 'password'. And now five years later, '123456' is the most commonly used password and 'password' has acquired the fourth place. NordPass research confirms says that people use simple passwords which can be remembered easily for convenience. However, just like these passkeys are easily memorable they are also vulnerable and can account with these keys can be hacked easily. How to Remove Password From a PDF File on Your Smartphone.

NordPass has advised people to not use "dictionary words, number combinations, or strings of adjacent keyboard combinations" for passwords. Passwords like "qwerty" are easy to crack. The report adds, "Also, refrain from repetitive characters, such as 'aaaa' or '123abc' and under no circumstances choose passwords based on personal details that might not be completely confidential, such as your phone number, birth date, or name."

NordPass has also advised people against reusing passwords across multiple accounts but create a unique one for each account. Users are advised to also make passwords long and should not fix a password shorter than 12 characters. It is generally advised to make use of both upper- and lower-case letters, numbers, and symbols to "significantly lower the risk" of getting the passwords cracked. The report further states, "Also, make sure to change your passwords at least every 90 days."

(The above story first appeared on LatestLY on Nov 20, 2020 07:30 PM IST. For more news and updates on politics, world, sports, entertainment and lifestyle, log on to our website latestly.com).