16-Foot Burmese Python Snake Rescued in Assam’s Nagaon District, Know Interesting Facts About One of the Largest Species of Snakes 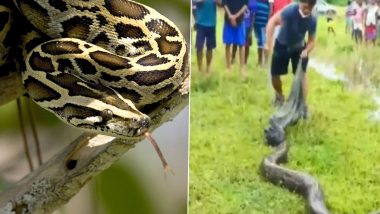 A 16-foot Burmese python was rescued from the Borghat Chapanala area in Nagaon district of Assam on Saturday. It was later released in the Swang Reserve Forest. A video of the huge snake shared by ANI, has gone viral on social media platforms. The snake was spotted while trying to devour a pet goat in the villager. The animal rescuer was thereafter summoned who captured the snake and put it in a sack. The snake catcher said the reptile weighed 38 kgs. World Snake Day 2020: From Serpent Crawling on ATM Machine to King Cobra Drinking Water From Bottle, Watch Viral Videos of Snakes That Ssscared The Netizens.

The video shows a group of locals watch the rescue operation as some of the records it on their phones. The snake was then taken away under the supervision of the Forest Department and was released in the nearby Swang Reserve Forest. Meanwhile, we bring to some facts about the Burmese python, the species that is native to a large area of Southeast Asia but is found as an invasive species elsewhere. World Snake Day 2020 Date, History and Significance: Know About the Day That Spreads Awareness About Different Snake Species Around the World.

Meanwhile, last week, a 15-feet-long King Cobra was rescued by forest officials from a village near Tamil Nadu's Coimbatore. Video of the rescue showed a man using metal hooks to capture the venomous serpent; it was later taken to Survani forest and released in the wild.

(The above story first appeared on LatestLY on Jul 15, 2020 05:15 PM IST. For more news and updates on politics, world, sports, entertainment and lifestyle, log on to our website latestly.com).