A Twitter user shared a picture of a couple taking their sexual fantasy at a public display. The tweet has divided the internet. While some are okay with it, since no sex is involved, others are entirely against the public display. 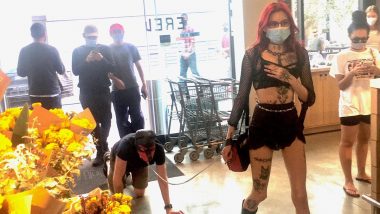 What’s wrong with it? Twitter users are divided on the viral pic. While some are of the opinion that there is nothing wrong about it considering that there is no sex involved, others are against it. They believe that couples should not bring their kink to public places because not everyone is ‘consenting’ of being part of the scene.

Kink is beautiful & consensual. The slave is very happy to be attending his mistress there as that is the relationship they have. No live sex act is taking place. If someone brings their 200 pound pit into Starbucks, no one says anything as they have no right. No difference here.

Public humiliation is great and all, but we gotta talk about... You know, maybe not doing this in public spaces because not everyone is consenting to being part of the scene that you brought to the store.

No Sex Involved in Public, So No Problem!

I don't see what the big deal is. There's no sex act involved. If my son asked me why they were doing that I would say "They're just playing. Sometimes grownups in a relationship like to dress up and pretend to be other people or even animals." There's a lot worse to be seen.

Why do people think it's a good idea to practice kink in public? . . . With people who didn't consent to see/participate in it

I don’t “consent” to see straight people make out on the subway but it doesn’t matter because I don’t get to police other people’s behaviour that doesn’t actually involve me.

Why should people have to get consent from everyone else for their kink? Providing the people engaging in it are constenting and no laws are being broken what’s your issue?

They’re wearing masks and social distancing, not sure what the big deal is

Keep it in bed and nobody will complain

This is disgusting and I wish people stopped taking their kinks into public spaces.

Public display of love has always garnered eyebrows. And when it comes to kink and role-plays or sexual involvement in public, there are a varied of opinions. Should couples cover their kink, when in public to avoid social shamming?

(The above story first appeared on LatestLY on Oct 19, 2020 03:45 PM IST. For more news and updates on politics, world, sports, entertainment and lifestyle, log on to our website latestly.com).