Butt Injections on Zoom! Florida Nurse Mistakenly Broadcasts Someone Getting a Butt Injection During a Court Hearing in a Viral Video 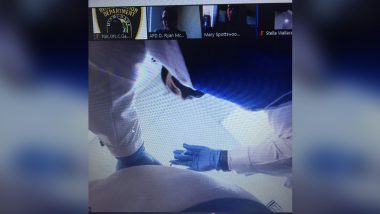 Zoom mishaps have become so common these days. Right from people having sex and other XXX activities, to forgetting their sex toys and farting on in a virtual meeting we have seen almost everything BUT now a Florida nurse broadcast someone getting a butt injection during a Zoom court hearing on Wednesday over her grand theft charges and the video is now going viral. The defendant, Niurka Aguero, posted a video of a needle apparently going into someone's butt while waiting before her case was brought before the judge, according to the Miami-Dade State Attorney's office. It's common for routine status hearings over Zoom to include multiple defendants as they wait their turn before being heard by a judge. This is not the first time something like this has gone viral on social media. From ‘Potato Boss,’ to husband drawing d*ck pic on wife’s whiteboard before her zoom meeting, there have been so many incidents in the past. There have been some really embarrassing moments on zoom classes, like in one case, a naked mum accidentally appeared in the background of her son's online class. This one was a planned embarrassment, that would sure make a tale for the kids to share with everyone.

But in this case, an image of the butt injection going viral and the Zoom butt injection was first shared on Twitter by Miami Herald reporter David Ovalle. "MIAMI ZOOM COURT: We've reached peak 305. Someone appears to be getting a butt injection while appearing in a virtual hearing," Ovalle wrote on Twitter.

MIAMI ZOOM COURT: We’ve reached peak 305. Someone appears to be getting a butt injection while appearing in a virtual hearing pic.twitter.com/2bRK3IATQz

A few weeks ago a video is doing rounds on the internet and is making everyone cry out of laughter. ‘I am not a cat,’ a US lawyer was captured informing the judge during a virtual hearing as he struggled with the kitten Zoom filter. Be it ‘Potato Boss,’ or Zoom meetings funny memes, the experience has been great so far. So, when the video of this US lawyer went viral, struggling with his cat filter, netizens could not stop but share it widely.  Just, a recent mishap, or shall we say an occurrence captured a woman leaving a sex toy  (a phallic object) in the background while appearing on BBC Wales. Yvette Amos appeared on the Welsh news program on Tuesday evening to discuss her experiences of unemployment during the pandemic and people couldn't help but spot the "sex toy" in the background. But there are so many zoom fails in the past year and the embarrassing moments continue. A few months ago, another couple was caught having SEX on a Zoom meeting after the participant forgot to turn his camera off in Rio de Janeiro.

Before that, a businessman appeared naked on a Zoom call with the Brazilian president! Yes, the poor man may have forgotten to turn off his camera and went shirtless. Initially, when a lot of people began using zoom, the conference call service, Zoom was found to have security concerns after cybersecurity researchers warned about security loopholes in the software. Not long ago, a boss was caught having SEX with his secretary. Government official, Estil joined a meeting and accidentally left his camera on that caught him having sex with a woman who is said to be his secretary. A similar incident went viral a few weeks ago where a woman named Jennifer, on a video conference call with her colleagues accidentally took her phone in the bathroom and sat to pee.

(The above story first appeared on LatestLY on Apr 22, 2021 08:41 PM IST. For more news and updates on politics, world, sports, entertainment and lifestyle, log on to our website latestly.com).