There are only about 2,500 Red Pandas left in the world. Listed as 'Endangered' in the IUCN red list of threatened species and under Schedule I of the Indian Wildlife (Protection) Act 1972, Red Panda is found across the contiguous areas of Nepal, Darjeeling, Sikkim, Bhutan, Tawang and other western districts of Arunachal Pradesh and even in parts of Meghalaya. 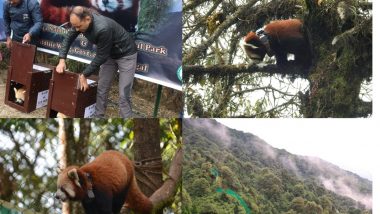 New Delhi/Darjeeling, January 20: Two pairs of Red Pandas, an endangered species, from the Darjeeling Zoo were restocked in the Singalila National Park, the second such restocking by the zoo since 2003-4.

Over the decades, the population of Red Pandas is decreasing because of a number of threats to their habitats. The effort at restocking them in the wild was to ensure that their population in the wild remains stable.

"A similar attempt was made in 2003-04, when the zoo had released two female Red Pandas. The effort this time round has been made following advanced studies and technology-based inputs, and with better equipment such as satellite collars," Darjeeling Zoo director Basavraj Holeyachi told IANS over phone. Rare Red Panda Born in Berlin Zoo From Indian Parents As Part of Global Breeding Program, Watch Video.

As per the World Wide Fund-India (WWF India), Red Panda, the arboreal mammal, thrives best at 2,200-4,800 metres in deciduous and coniferous forest with dense understories of bamboo.

There are only about 2,500 Red Pandas left in the world. Listed as 'Endangered' in the IUCN red list of threatened species and under Schedule I of the Indian Wildlife (Protection) Act 1972, Red Panda is found across the contiguous areas of Nepal, Darjeeling, Sikkim, Bhutan, Tawang and other western districts of Arunachal Pradesh and even in parts of Meghalaya.

Saket Badola of Traffic India, working to raise awareness about wildlife trafficking, while appreciating the step by the zoo, tweeted: "The major threats faced by Red Pandas include their illegal extraction from the wild for pet trade and their poaching for pelt that is used to make traditional fur articles."

The four Red Pandas -- Smile, Shifu, Noel and Yeshe, aged 4 years, 6 years, 8 years, and 9 years, respectively -- were released in the soft release facility located within the park two days ago. The facility is spread across 2 hectares of land within the National Park. Once the Red Pandas are totally wild, they will be released outside the facility. Behavioural analysis and other research were done continuously while turning the zoo-bred Red Pandas into wild ones to some extent.

"The soft release will make them completely wild. We need to reduce the human imprint. We don't want to see humans as their benefactors," Holeyachi said, adding that the entire process went on for almost 7-8 months.

The Red Pandas' pedigree and genetic analysis were carried out to ensure that animals with same parentage are not released in the wild. Most distant individuals were selected from among the population.

"Through pedigree analysis, with the help of experts from Rotterdam Zoo, the Netherlands, the genetic study was carried out with the assistance of the Centre for Cellular and Molecular Biology (CCMB), Hyderabad," Holeyachi said. Giant Panda 3D View on Google Not Working, View Cutest HD Photos & WhatsApp Stickers of Pandas and Download Them for Free Online!.

Darjeeling Zoo is famous for conservation breeding of Red Pandas, Snow Leopards, Himalayan Herbivores, and Himalayan Pheasants since the 1990s. Recently, two zoo-bred Gorals and Red Jungle Fowls were released in the wild.

January-February is the breeding season for Red Pandas. It would be only by June that the zoo team would come to know if the Red Pandas have bred among themselves as the litter will be seen only then.

"Otherwise also, we will be monitoring them for 72 weeks. So, if not this breeding season, next breeding season we are sure to get some good news," said an elated Holeyachi.

(The above story first appeared on LatestLY on Jan 20, 2022 11:20 PM IST. For more news and updates on politics, world, sports, entertainment and lifestyle, log on to our website latestly.com).