The United States President Donald Trump has tweeted an image of his head photoshopped with the body of Sylvester Stallone from Rocky Balboa, the title character of the Rocky film series. 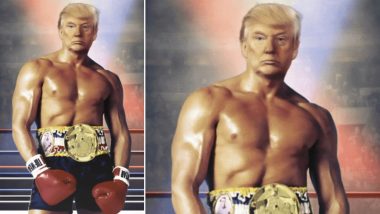 The United States President Donald Trump has tweeted an image of his head photoshopped with the body of Sylvester Stallone from Rocky Balboa, the title character of the Rocky film series. He simply posted the image on his social media handles with no caption making netizens wonder even more about the POTUS' thoughts. Internet users had a good laugh seeing the bizarre combination of Trump's head and Stallone's body. Trump occasionally posts memes and spoofs made on him on his social media pages. The photo used in Trump's tweet was the original Rocky III movie poster. Donald Trump Uses Nickelback ‘Photograph’ Meme to Expose Joe Biden, Gets Brutally Roasted by Twitterati.

In October, he shared a fake image of awarding military dog Conan with the Medal of Honour. In the photo, Trump was putting a medal around the neck of the dog which had a paw medallion. However, the photo Photoshopped using the declassified image of the dog he originally shared. It was a photoshopped version of the actual photo of Trump awarding the medal of honour to James McCloughan, a retired army medic in 2017.

The photo was quick to go viral on Twitter with people coming with different kinds of explanation.

Most people criticised the President's decision to tweeted a funny photo while there are other important things to address.

There are 1,000 things I am sure I could say about this jaw-dropping moment of presidential insanity, but for the life of me, I am too stunned to think of any of them. pic.twitter.com/OdEezNS6A3

Have You Ever Thought Of It?

A reminder that Trump tweets are official statements from the WH https://t.co/Uqapskjt5A

While most Twitterati appeared confused trying to decipher the intention of Trump's thoughts, others pointed out that Wednesday marked the 34th anniversary of Rocky IV premiering in theatres. People said that probably Trump was commemorating the anniversary and go the movie wrong.

(The above story first appeared on LatestLY on Nov 28, 2019 09:07 AM IST. For more news and updates on politics, world, sports, entertainment and lifestyle, log on to our website latestly.com).