The Everglades region in Florida is known for housing dangerous Burmese python snakes. Snake hunters are employed in the region to kill these long invasive snake species. But now authorities are considering if these snakes can be killed for consumption of their meat! 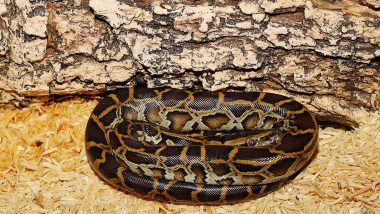 We have time and again heard of some bizarre stories from Florida but this one may seem a little too far, especially if you fear snakes. The Everglades region in Florida is known for housing dangerous Burmese python snakes. Snake hunters are employed in the region to kill these long invasive snake species. But now authorities are considering if these snakes can be killed for consumption of their meat! With growing population of these dangerous reptiles, authorities are looking at ways in which the snakes can be deemed 'fit for consumption.' Last month, a beastly sized python at 18.8 foot long became the potential record for largest snake caught in the state.

The Burmese pythons are massive snakes which can grow upto a 20 feet and they feast on the little animals in the marshy regions here. These invasive species has been a problem since years but despite many snake hunters working to kill them, their populations are still comparatively rising. As per a report in USA Today, an initiative is being considered by the state’s wildlife conservation commission and department of health. The health department is looking at the mercury levels in the python's body which can make a risk to make them "fish." Biggest Python Ever! Snake Hunters Catch 17-Foot Pregnant Female Carrying 73 Eggs From Florida Everglades, View Pic.

The other techniques being employed to take on these apex predators are hiring more hunters, investing in near-infrared technology to better see the snakes, and training python-sniffing dogs. Eric Sutton, director of the Florida Fish and Wildlife Conservation Commission told the  South Florida Water Management District board members about the current mercury testing on python meat. Consumption of this mercury by humans can result in damage to the brain or reproductive system. However, a python hunter who has been feasting on the meat of these large snakes mentions that if cooked well, the snake meat can be used in recipes of chicken and pork.

(The above story first appeared on LatestLY on Nov 21, 2020 10:56 AM IST. For more news and updates on politics, world, sports, entertainment and lifestyle, log on to our website latestly.com).