Elon Musk Announces Brief Break From Twitter; Netizens Say They Will ‘Take Over From Here’ in Hilarious Reactions

The Tesla CEO Elon Musk, who is always active on Twitter, announced to take a short break from the microblogging platform in a cryptic tweet. Musk tweet so far gained more than hundreds of thousands like, with thousands of responses over his decision to take a brief break from social media. 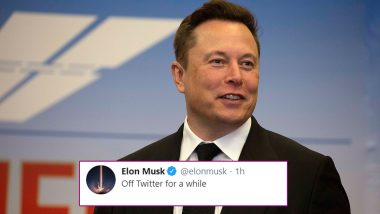 After the successful SpaceX launch, seems like Elon Musk needs a break from the social media world. The Tesla CEO, who is always active on Twitter, announced to take a short break from the microblogging platform in a cryptic tweet. Now can the world ever take any Musk’s tweet lightly? Never! The tweet instantly went viral, getting thousands of reactions in the form of memes and jokes. Netizens poke fun at the viral tweet with some saying; they are ready to “take over from here.” Musk tweet so far gained more than hundreds of thousands like, with thousands of responses over his decision to take a brief break from social media. Elon Musk Son's Name Changed to X Æ A-Xii But The Memes Remain Constant, Netizens Make Funny Jokes Calling it 'Software Update'.

“Off Twitter for a while,” Musk tweeted on June 2, 2020. His announcement got the attention of his 35 million followers on Twitter. The message was short and offered no explanation as to why he had decided to step back from the microblogging platform. There was no mention of when he might be returning back. Possibly, like many other social media users, the billionaire entrepreneur may simply want some time off following an intense period of activity in the recent weeks, which included the SpaceX mission involving first-ever astronaut launch using the Crew Dragon spacecraft.

Whatever the reason, it sure got Twitterati in talk. While some kept wondering the reason behind his break from social media, others shared hilarious jokes in response. Anonymous, the ‘hacktivist’ who made a comeback also responded to the viral tweet of Musk, saying, “We’ll take it from here.”

Hey Elawwwn the crew will take it from here. Itll be fine.

We'll take over from here

Ready for Some Entertainment?

Some Wished Him A Good Break!

Take care Elon... Twitter won't be the same place without you ❤️

As we mentioned, it is not known as to why the entrepreneur has decided to take a break from Twitter. The SpaceX CEO teamed up with NASA and launched two astronauts from US soil into space for the first time in a decade. He also recently became a father again. The break from social media could also be so that he gets to spend more time with his family. Whatever the reason might be, we wish him a nice break.

(The above story first appeared on LatestLY on Jun 02, 2020 10:03 AM IST. For more news and updates on politics, world, sports, entertainment and lifestyle, log on to our website latestly.com).