Anonymous, the 'Hacktivists' Are Back Amid the US Unrest Over George Floyd Murder! Things You Didn't Know About the Feared Vigilante Group 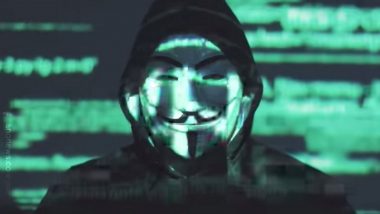 The cyber-world is on alert as Anonymous, the 'hacktivists' are back. This online vigilante group on the internet were once highly-feared after they have taken down major companies and organisation over instances of discrimination. A viral video has been posted originally on Anonymous’ own Facebook page and it has given away some major details on its thoughts about the current situation of unrest in the US after the death of African-American George Floyd who was killed by an ex-officer of the Minneapolis Police Department, Derek Chauvin. In the video, the silhouette of a black hooded jacket and the signature Guy Fawkes mask gives out their opinion about George Floyd's death. The person/silhouette was highly feared in the past and was inactive for a few years. 'Anonymous' Hacker Group Returns After Three Years Amid Violent Protests Over George Floyd's Death, Leaves Video Message For Minneapolis Police, Promises to Expose 'Many Crimes'.

In the video, the figure says, “Police brutality and murder is a widespread problem in the United States, which has undoubtedly infected nearly every jurisdiction in the country. But, the Minneapolis police department is among the worst and has a horrible track record of violence and corruption. This week’s brutal killing of George Floyd, which has sparked protests and national outrage, is just the tip of the iceberg in a long list of high profile cases of wrongful deaths at the hands of officers in your state.” George Floyd Murder: Asphyxia Confirmed as Cause of Death in Independent Autopsy Ordered by Deceased's Family.

The George Floyd death has created a huge stir in the United States with protestors ravaging different places around the country calling out the discrimination against black people. However, Anonymous has threatened to expose the Minneapolis Police Department and their track record of brutality. It also hints at having evidence regarding Donald Trump, Jeffery Epstein, Princess Diana's death, the Royal Family, Bill Gates, Naomi Campbell's involvement amongst others.

The video message further states, “In the past two decades, 193 people have been killed by police in Minnesota, including the deaths of Jamar Clark, Philando Castle, Justine Damond, Thomas Blevins and Brian Quinones. These are only the cases that caught headlines, where videos and other evidence prove that the police are lying.” The video draws attention to the “travesty has continued for far too long, and the people have had enough.”

Anonymous conclude their message by saying, “You may have fired the officer to save face, but it is obvious that this type of behaviour is condoned, if not encouraged in your department, as it is in others. Officers who kill people and commit other crimes need to be held accountable just like the rest of us; otherwise, they will believe they have the license to do whatever they want.”

Who Are the Hacktivists 'Anonymous'?

Anonymous has been known as a vigilante group that claim to help several causes and take the matter of fighting injustice in their own hands. The decentralized international activists call themselves "hacktivist" as they use hacking as the tool to launch cyberattacks against several governments, government institutions and government agencies, corporations, and the Church of Scientology. Anonymous goes after its targets who they think have wronged in any way. From crashing Web servers, website defacement to leaking private information, they resort to various ways to terrorise the people they think are unfair. The group grabbed several headlines for targeting several big names.

Things To Know About Anonymous Hacktivists

In the year 2008 Anonymous emerged as a group of hacktivists who then got national attention after they hacked the Church of Scientology Website.

They Aren't All Hackers

While it may seem like they are a group of mastermind hackers but actually anyone can join the group. Not all have the ability to take down major corporations with hacking.  The entry to this group is quite easy.

What Does It Take To Join Anonymous?

You must have an encrypted computer and a cause that you support. Whether it an operation against the Islamic State in Syria (ISIS) or injustice towards black lives, you need to have a vision you want to fight for. You have to find the IRC chat room dedicated to that operation and pledge your support

The hacktivists are known to hate censorship. In the year 2010, when several Bollywood companies hired Aiplex to launch DDoS attacks on sites to curb pirating movies, the hacktivists responded by cyber-attacks on a number of anti-piracy and pro-copyright organizations.

Anonymous And Their Take On Criminal Activities

One of the major cases that form as a highlight in all the cases anonymous has involved itself with was of a sexual assault case in 2011 when in a party, an intoxicated female teen was sexually assaulted in Steubenville, Ohio. Although the pictures of the incident surfaced online and were circulated in her school, police didn't take any action. However, a local group of anons picked up the trail and using that one picture they gathered enough information to get the names and physical descriptions of the suspects.

Anonymous recently sent chills through spines after they claimed to make revelations about Princess Diana's death being a murder planned by the British royal family. Princess Diana who was with her rumoured beau Dodi Al Fayed before the two lost their lives in a fatal car crash inside a tunnel in Paris was said of being aware of a "sex trafficking ring in the royal family."

(The above story first appeared on LatestLY on Jun 02, 2020 09:30 AM IST. For more news and updates on politics, world, sports, entertainment and lifestyle, log on to our website latestly.com).