Virat Kohli too dropped in a comment and wrote, “My whole world in one frame.” Team India all-rounder Hardik Pandya, Bollywood actors Ishaan Khatter, Siddhant Chatrurvedi, director Zoya Akhtar were among the celebrities who reacted to Anushka’s post on Instagram. 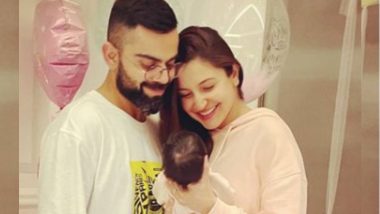 Bollywood actress Anushka Sharma took to Instagram to share the first picture of her new born daughter. The actress shared a photo of her husband Virat Kohli, Indian cricket team captain, standing next to her as she holds her daughter. Anushka also revealed that the star couple has named their new born daughter as Vamika, which means ‘Goddess Durga’. Apparently, the photo shared by actress was all-over the internet and #ViratKohli, #AnushkaSharma, and #Virushka became one of the trending topics. Not just the fans, Bollywood and cricket stars also reacted to the photo. Anushka Sharma And Virat Kohli Name Their Baby Girl Vamika! Know The Meaning Behind The Name Of The Couple’s Little Angel.

Kohli too dropped in a comment and wrote, “My whole world in one frame.” Team India all-rounder Hardik Pandya, Bollywood actors Ishaan Khatter, Siddhant Chatrurvedi, director Zoya Akhtar were among the celebrities who reacted to Anushka’s post on Instagram.

While sharing the photo, Anushka wrote, “We have lived together with love, presence and gratitude as a way of life but this little one, Vamika has taken it to a whole new level! Tears, laughter, worry, bliss - emotions that have been experienced in a span of minutes sometimes Sleep is elusive but our hearts are SO full Thanking you all for your wishes, prayers and good energy.”

Pandya and Others React 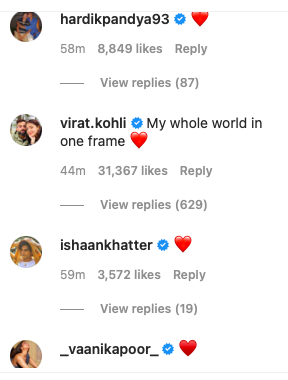 Congratulations to both of you... May God Bless the Little One! @imVkohli @AnushkaSharma

On January 11, Anushka and Kohli welcomed their daughter at Mumbai's Breach Candy hospital. Kohli then shared the news on Twitter and in a post wrote that both baby and Anushka are healthy. The duo had tied the knot in December 2017 in Tuscany, Italy.

(The above story first appeared on LatestLY on Feb 01, 2021 12:44 PM IST. For more news and updates on politics, world, sports, entertainment and lifestyle, log on to our website latestly.com).