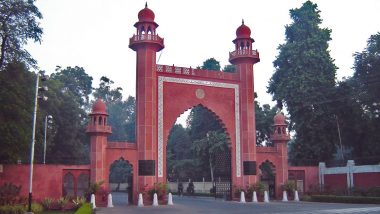 A fighter plane gifted to Aligarh Muslim University by the Indian Air Force (IAF) in 2009, was listed online for sale at a price of Rs 9.99 crore. The aircraft which was installed in the campus was up for sale on the online platform on Monday. However, the post was quickly removed after the incident came to light. Following which, the university authorities have clarified that the post on the website is fake and the aircraft was not actually on sale. They also said that the incident was the defame the institution's reputation. Aligarh Muslim University Scientist Discovers Proteins That Form Cancer in Liver.

Mohd Wasim Ali, AMU Proctor was quoted as saying, "The post on OLX about the sale of aircraft installed in the campus is wrong. University has not taken any step to auction or sell it. We are looking into the matter. It's an attempt to defame the university." The aircraft was on sale on the online platform on August 3.  The aircraft at the university was a symbol of the Indian Air Force (IAF) at the campus. It was installed outside the AMU's engineering department in 2009. Aligarh Muslim University Alumnus Develops Testing Kit to Detect COVID-19.

The online sale of the retired aircraft spread like wildfire on social media platforms creating a furore. People even questioned the motive behind this act. As soon as the news created a furore, the university authorities flung into action and the post was deleted from OLX,  an online international marketplace where people sell and buy products. The MiCO MiG-23BN fighter plane was retired after being in the Indian Air Force for nearly 28 years.

(The above story first appeared on LatestLY on Aug 04, 2020 01:10 PM IST. For more news and updates on politics, world, sports, entertainment and lifestyle, log on to our website latestly.com).