From making memes on friends they know named as Lalit to fans reactions on the scene, social media is having a field day. Not only Twitter, but Lalit funny memes and jokes are also on all the social media platforms, and they have gone crazy viral. 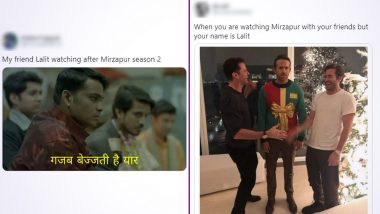 Mirzapur 2 on Amazon Prime has a huge number of followers. The ongoing show manages to remain on the top spot among its desi fans on social media. With the web series, is a hilarious set of funny memes and jokes that are have gone crazy viral. Internet is flooded with hilarious memes already, and then, Divyendu Sharma, aka, Munna said the name Lalit— well adding the cuss word with it. Desi Twitterati cannot get enough of the scene, and all they are talking about at the moment is Lalit, obviously. From making memes on friends they know named as Lalit to fans reactions on the scene, social media is having a field day. Not only Twitter, but Lalit funny memes and jokes are also on all the social media platforms, and they have gone crazy viral.

The Amazon hit web series, Mirzapur 2 stars Pankaj Tripathi, Divyenndu Sharmaa, Shweta Tripathi, Ali Fazal, Isha Talwar, Vijay Varma and Rasika Dugal in pivotal roles. Most of the actors have appeared in the memes, and the character of Divyenndu Sharma—Munna never gave any lesser moments for the netizens to make hilarious reactions. Be it ahead of the show the first night of its release, Mirzapur 2 sure earned a lot of attention on the internet. So, when he used the cuss word with Lalit, it was quite expected for fans to create memes. But anyone hardly imagined that it would become such a sensation on the internet, especially those named Lalit. We are sorry Lalits, but the memes are hilarious AF!

Netizens are tagging the people they know named Lalit with the funny memes. The jokes even hilariously display how Lalits are feeling at the moment, as they are now another great victim of Mirzapur 2 followers. In this article, we bring you some of the amusing reactions on social media.

When you are watching Mirzapur with your friends but your name is Lalit pic.twitter.com/ugAlHX8G2r

Me and the boys looking at our friend Lalit while watching Mirzapur Season 2: pic.twitter.com/G8oAxolo4Q

When one of your friends name is 'LALIT' #Mirzapur pic.twitter.com/LvEp6ypGfZ

When you are a die hard Mirzapur fan but your name is 'Lalit' pic.twitter.com/rj6Qk2Z0lY

When you're waiting for #Mirzapur from past 2 years and you saw the #Mirzapur2 but your name is LALIT 😪 pic.twitter.com/muAJ6fN9MN

Are You Singing in That Exact Same Way?

When they see their ex whose name was Lalit.

After Seeing Mirzapur S2 and hearing one of the greatest song on Lalit.

Lalit memes are the latest jokes from the hit series. With great suspense from the action, crime thriller series comes greater reactions, and we eagerly wait for more. But for now, condolences to all the Lalits, meme lovers just got a great template to make more jokes!

(The above story first appeared on LatestLY on Oct 29, 2020 02:19 PM IST. For more news and updates on politics, world, sports, entertainment and lifestyle, log on to our website latestly.com).