Mumbai Rains: From Barso Re Megha to Arey Re Arey, Bollywood Songs that Depict Every Monsoon Mood of Mumbaikars

As heavy rains battered the city in the last few days, most Mumbaikars are hoping the rains would take a little break. We try and decode the monsoon mood of Mumbaikars through Bollywood's rain songs. 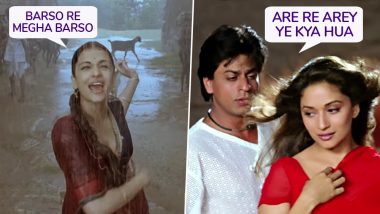 If there is one thing that any Mumbaikar would not want to hear right now is "It is predicted to rain heavily for the next 48 hours." Over the weekend, the rains have caused havoc and the city was crippled with the railway trains blocked, waterlogging on roads, loss of electricity and water entering some houses. The torrential downpour also claimed some lives of people in different parts of the city, several others had to relocate from their abodes. Overall, the rains replicated the 2005 floods in Maharashtra, and people have grown tired of the constant showers. So while most of us eagerly awaited the arrival of monsoons, we feel an exactly opposite feeling right now. And what better way to express it all than through a good monsoon playlist? We have tried to capture a Mumbaikar's moods of the monsoon season by using Bollywood rain songs. Mumbai Rains 2019: As The City Experiences its First Heavy Showers, Funny Monsoon Memes Flood The Internet (Check Pics and Tweets).

The summer temperatures were breaking a record, the skin was sweltering in the heat and all we could await was the arrival of monsoon. So all eyes were towards the sky as it became a little dim in the evenings. We awaited the monsoons.

The month of June this year went dry. Usually arriving by the first week of June, monsoon clouds were nowhere to be seen. Naturally, all everyone thought of was, "Kaale megha paani toh barsao?"

And there it was, a great arrival. As monsoons arrived towards the end of June, people were relieved to get a respite from the summer heat. The petrichor of the first drops hitting the ground is a pleasant feeling, which cannot really be put into words, hence the song!

The rains continued and greenery was everywhere. The welcome change in the weather, needless to say, is a time to tune in to romantic monsoon songs. Bollywood has so many songs that intertwine rains and romance; it's a different affair altogether. Everything is so mastana, suhana and people going deewana over the season.

Now coming to the last two weeks, when the rain gods seem to have made up for the last five years! Not kidding, Mumbai has recorded the highest July rain in five years. So we went straight to "O Sawan Raja, Kaha se aaye tum?"

Railway tracks covered with water, waterlogged roads, landslides, cracks in roads, made Mumbaikars lose their way, hence: "Idhar chala, me udhar chala, jaane kaha me kidhar chala! "The city roads were congested with traffic (and of course, potholes) so everyone everywhere wondered how to go and where to go. 26 July: Heavy Rains Batter Mumbai, Reminding People of 2005 Floods 14 Years Ago on Same Date.

Over the last two weeks and especially over the weekend, the city came to a halt. There was a continuous downpour in the city and suburbs alike. The rain didn't seem to stop and with the lakes, rivers and nullahs all full, the rainwater accumulated everywhere. "Arey re arey ye kya hua?" is the dominant mood right now!

So from an eager wait for the monsoons to prayers for the rains to stop, the moods of Mumbaikars in this season have changed and how! We do not mean to undermine anyone's sufferings, given the sad state of city dwellers who have to stay locked in or drenched outside. But the moods of monsoon this season are definitely changing.

(The above story first appeared on LatestLY on Aug 06, 2019 05:03 PM IST. For more news and updates on politics, world, sports, entertainment and lifestyle, log on to our website latestly.com).