Mumbai Woman Stands in Rain For 7 Hours to Alert Drivers About Open Manhole, Says 'BMC Scolded Me For This' (Watch Video)

A video of a woman standing in a waterlogged street in Mumbai to warn motorists about an open manhole went viral on social media recently. 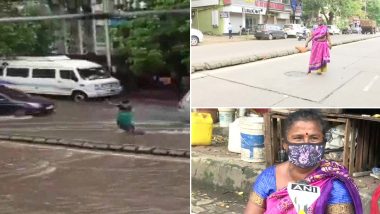 Mumbai, August 10: A video of a woman standing in a waterlogged street in Mumbai to warn motorists about an open manhole went viral on social media recently. The woman, Kanti Murti, recieved a lot of appreciation for her noble act. However, it appears this did not go well with the Brihanmumbai Municipal Corporation (BMC). Speaking to news agency ANI, Kanti Murti said the civic body scolded her for opening the manhole, which she did to drain water. Mumbai Rains: Woman, Two Children Swept Away in Flooded Drain in Santacruz.

"I uncovered the manhole to drain water and stood there to warn vehicles. BMC officials came later and scolded me for it," Murti told ANI. She added that she stood there for seven hours. The viral video showed Murti signalling drivers about the open manhole in a waterlogged street amid the heavy rain. To clear water, Murti had opened the manhole and then stood there so that no vehicle or person falls or gets stuck. The incident took place in Matunga. Mumbai Couple's Fight on Street Gets Dramatic in the Middle of Road as Wife Climbs Husband's Car, Video Gets Viral.

Mumbai: Kanta Murti, who was seen in viral video (of August 4) guarding an open manhole in Matunga to avert accidents, says she stood there for 7 hours.

Says, "I uncovered the manhole to drain water & stood there to warn vehicles. BMC officials came later & scolded me for it." pic.twitter.com/dOTKG5hZdW

Murti had opened the manhole in the middle of the street, and perhaps that's why she faced BMC's wrath. Netizens, however, only has the praise of her and shared her video thousands of time. A Twitter user wrote: "I salute this lady and wonder what the relevant govt. department is doing to stop it or for making alternate arrangements (sic)." Another posted: "Great work.... She has opened the manhole so that the water that's collected out there goes in that manhole."

(The above story first appeared on LatestLY on Aug 10, 2020 02:28 PM IST. For more news and updates on politics, world, sports, entertainment and lifestyle, log on to our website latestly.com).