The Model X owner credits his vehicle for ‘saving’ him from serious harm as the electric SUV was hit by a crashing plane. 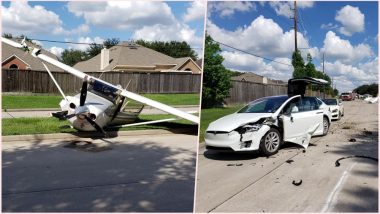 It is a wonder to own a Tesla. The features of the vehicle come up in the news headlines very often, especially when there is a severe accident that involves it. An Indian-origin Tesla Model X owner posted pictures on his Facebook account which shows how the car prevented what could have otherwise been a serious crash. In fact, the Model X owner credits his vehicle for ‘saving’ him from serious harm as the electric SUV was hit by a crashing plane. The incident happened near Houston in Texas on September 19. Tesla under Investigation by U.S. Justice Department For Elon Musk’s Tweets.

A plane experienced a mechanical problem during a flight, and the pilot decided to land on a public road. Reportedly, while the plane approached, it caught some power lines and eventually crashed into several vehicles on the way including Oniel Kurup’s Tesla Model X. Thankfully, no one inside the car was hurt despite the severity of the crash. Media outlets further claim that one of the three agents on board the plane was injured. Tesla Model X Creates A New Guinness World Record By Towing Qantas Boeing 787-9 Dreamliner - Watch Video.

Oniel Kurup took to Facebook to reassure his friends and family that he was ‘completely fine’ along with a few images of the incident.

Tesla CEO Elon Mush commented on the accident after another Tesla owner tweeted about the story and brought it to his attention.

It is fortunate to know that no one was hurt. Tesla is renowned for designing its vehicles around safety, and horrific incidents like this one push the company to achieve the best safety rating possible. Tech experts believe Tesla Model X as the highest safety rated SUV in the United States with a 5-star rating in every safety category. Last year, another Model X owner said that the SUV’s safety rating ‘saved his life’ after he crashed into a semi-truck. In August, this year, a Tesla Model 3 owner claimed that its Autopilot feature ‘saved his life’ from a speeding car which almost crashed into his vehicle on the highway.

(The above story first appeared on LatestLY on Sep 21, 2018 08:22 PM IST. For more news and updates on politics, world, sports, entertainment and lifestyle, log on to our website latestly.com).