PSL’s Muhammad Mudassar, Tallest Cricketer in the World, Becomes The Subject of Funny Memes and Jokes on Twitter Thanks to His Height 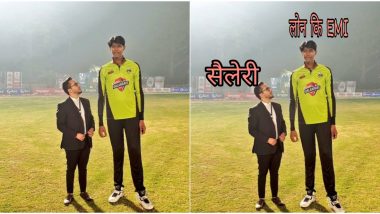 Muhammad Mudassar is world's tallest cricketer with a height of 7 feet 4 inches. He will be playing in Pakistan Super League by the franchise of Lahore Qalandars. A picture of him standing next to a commentator was shared widely on social media a few days ago. Mudassar's height has become a target of poking fun but in a good way for some netizens. The picture is indeed funny, the way the commentator is looking up at Muhammad Mudassar. Some funny reactions have begun to come in, be it memes, popular phrase interpretations, jokes or targets. PSL 2020: PCB Franchises Wish to Conduct the Next Season of the Tournament at Home.

Mudassar joined the Lahore Qalandars’ players development program on November 6 and will be trained for his bowling skills. He also intends to represent his country at the international level after playing in the PSL. He will become the tallest spinner ever to play the tournament. His height is indeed amusing and it is no surprise that Twitter has found some fun in there too. His height being compared to EMI loans, Monday tasks, popular phrases among other funny memes and jokes are trending on social media.

Check Some Funny Memes and Reactions on Muhammad Mudassar's Height:

Me, looking at my To-do list on Monday morning. pic.twitter.com/4EQZiJn06j

One cannot predict what can become a trend and how it catches up on social media. Maybe there would be more funny memes that would follow soon as the trend is just catching up. Before Muhammad Mudassar, Pakistan’s other played named Mohammad Irfan held the record for the tallest player. His height is 7 feet 1-inch.

(The above story first appeared on LatestLY on Nov 11, 2019 03:59 PM IST. For more news and updates on politics, world, sports, entertainment and lifestyle, log on to our website latestly.com).