Python on a Plane! Snake Falls From Jet Onto Runway At New Zealand Airport

The snake fell onto the runaway at Queenstown runway in New Zealand on December 15. The reptile was unnoticed until the pilot on the next flight reported the presence of a 'foreign object' on the tarmac. 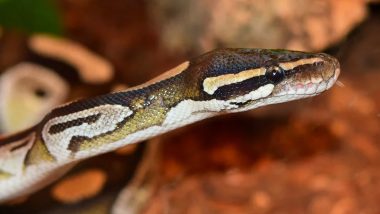 A flight from Brisbane to New Zealand accidentally carried a python snake in its undercarriage. The snake fell onto the runaway at Queenstown runway in New Zealand on December 15. The reptile was unnoticed until the pilot on the next flight reported the presence of a 'foreign object' on the tarmac. Initial reports say that the snake was euthanised by the authorities and it caused a delay of several minutes for the next flight. Live Snake in Pants! Man Caught Smuggling 16-inch Boa at Berlin Airport.

The python hitched on the ride from Brisbane to Queenstown, and fell on the runway just as the flight landed. Biosecurity NZ officers were called in when there was an alert of a foreign object on the tarmac by the pilot of the next flight. The spokesperson said the snake was likely to have stowed in the plane's undercarriage. Rescuing the snake caused a little delay in flights. Scottish Woman Travels With Python From Australia to Scotland, Realises Only After Reaching Home.

Reports also stated that the snake was decapitated with a shovel but the spokesperson denied it. As per reports in Stuff, "The snake appeared to still be alive when it was retrieved by our officers. The officers did not decapitate the snake but it was humanely euthanised." There have been cases of snakes found on a plane before too, or at least people trying to sneak these reptiles on the flight. A man had tried to sneak in a python at Miami International Airport in July this year but luckily he was caught on by the security. The man had tried to hide the snake in a computer's hard drive.

(The above story first appeared on LatestLY on Dec 25, 2019 01:25 PM IST. For more news and updates on politics, world, sports, entertainment and lifestyle, log on to our website latestly.com).