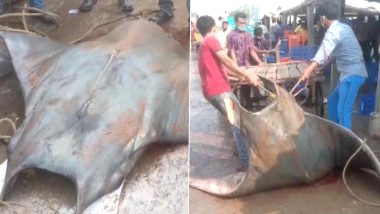 We have read numerous reports in recent times of mysterious sea creatures showing up in parts of the world. Some sea slugs, some really creepy-looking ones. Now, fishermen in West Bengal recently found a massive fish weighing almost 800 Kgs. Locals identified it as the 'Chilshankar' fish and it was approximately sold at Rs 20 lakh as per initial reports! Netizens are saying it was a giant manta ray and should have ideally been released back into the waters as it is an endangered fish. Pictures of the huge fish went viral early this week.

The fish was found on July 27 by fishermen in the coastal town of Digha in West Bengal. The massive fish resembles a stingray but is said to be one of the most loved delicacies here. The fishermen definitely lucked out with this catch as it fetched them around Rs 2 lakh! Getting the fish out of the water onto the shore was quite a challenge because of its weight. As per ANI update, the fish weighed 600 kgs and sold for Rs 50,000. Many people commented on the post that it was a manta ray fish. Giant 280-Kg Stingray Caught by Fishermen in Malaysian River, View Pics of The Rare Monstrous-looking Sea Creature.

West Bengal: A fish weighing about 600 kgs was caught by a fisherman off Digha Coast and sold at Rs 50,000. The fish is called 'Chilshankar' by locals. (29/7) pic.twitter.com/om1uvyAxtU

One of the biggest Manta ray

It's a manta ray. It's one of the biggest. It should be retured to sea.

This is an endangered species and should be protected. It is sad to see this fish in such condition. 😔

Its a giant manta ray... They are vulnerable and protected species.. their related species can even weight upto 1600 kgs.. but this is not that specie and doesn't look like 600 kgs also.. a fat buffalo weighs around 400 to 500 kgs.

Many others said it is the Manta ray and it is illegal to catch them as they are a protected species. But looks like the very rare find gave it an extremely high price. It was reportedly sold for Rs 2,100 per kilo at the wholesale marketing. Manta rays are listed as vulnerable by the International Union for Conservation of Nature. They also have a low reproduction rate which makes them an endangered species and a threat to their population includes entanglement in fishing nets, which is probably what happened in this case too.

(The above story first appeared on LatestLY on Jul 30, 2020 10:37 AM IST. For more news and updates on politics, world, sports, entertainment and lifestyle, log on to our website latestly.com).