Schoolgirls Uniform Fetish: More Than One in Three UK Girls Are Sexually Harassed When in School Uniforms 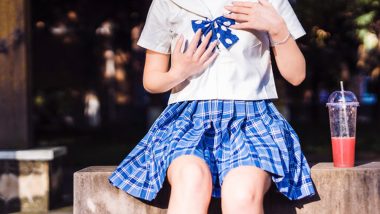 Sexual harassment is a serious problem and cannot be overlooked under any circumstances. It will not be wrong to say, but every day such situations are making headlines. And with the hashtags like #MeToo that are on trend in social media has awakened women from every corner to unite and speak up against it, forcing changes in the existing laws and bringing perpetrators to justice. Sexual harassment is everywhere, at the workplace, streets, schools and no place are left untouched with the brutal act. This problem is more common than one might think because many women, young and adults are scared or too embarrassed to report. Recently, a survey by a children’s charity in the United Kingdom reveals school girls being fetishised and harassed while in their uniforms. The report reveals that more than one in three girls has been sexually harassed in public when wearing school uniform. The unwanted attention included groping, staring, catcalling and wolf-whistling; the ones that most of us can relate. 30 Schoolgirls in Supaul Thrashed by Goons For 'Resisting Sexual Assault'.

Plan International UK is a global children’s charity who surveyed 1,004 girls aged between 14 and 21 years. The study found that 35 per cent had received such uncomforted attention in every form. One in eight of those participating in the study were aged 12 or younger when they experienced this for the first time. Further, one in seven had been followed, and eight per cent said that they had been filmed or photographed by a stranger with their consent or had someone take a photo up their school skirt. Post #MeToo Movement, Number of Workplace Sexual Harassment Claims Rise in US.

1. 66 per cent of girls in the UK reported to had experienced unwanted sexual attention or sexual or physical contact in a public space.

4. More than one in three girls received unwanted sexual attention and verbal harassment—being groped, stared at, catcalled and wolf-whistled while wearing school uniform.

5. One-quarter of girls had been filmed or photographed by a stranger without their consent.

The young girls described feeling “sexualized and fetishized” by “older men targeting school girls” because if the uniforms required of nearly all of Britain’s students. In the report, the researchers found street harassment to be ubiquitous. “I’ve never experienced harassment like I did then. Men would ask if they could take a picture with me in my uniform. It was awful. Before that I used to be walking home, and I was so scared walking home,” Ffion, 25, told the surveyors. While on the other hand, many girls also disagreed to the street harassment and called it “all part of growing up.” Skirts Banned in 40 Secondary Schools in England to Support Gender Neutrality.

The charity has further requested the government to recognise street harassment as a type of “gender-based violence”. It has made several recommendations in their report including the necessity of public awareness campaigns to spread the message that street harassment “is not OK”. The behaviours that these young girls shared in the report are universal. These disgraceful acts need to be called out and stopped. We have often found girls to spend considerable time and effort to try and prevent harassment from happening by changing what they wear and go. In the survey, these young participants have also listed the things they have been told to do to “stay safe” and the areas of the places they live that have become a virtual “no-go zones” in their efforts to avoid harassment.

(The above story first appeared on LatestLY on Oct 10, 2018 10:57 AM IST. For more news and updates on politics, world, sports, entertainment and lifestyle, log on to our website latestly.com).