Signal App Funny Memes Continue to Trend Online With Hilarious Jokes as Everyone Downloads The Messaging Service But Still Uses WhatsApp to Chat!

As many have installed Signal, they are not really using the messaging application as expected. This has become the target of funny memes and jokes online as everyone has downloaded it but no one's using it. 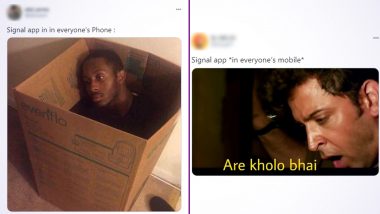 Have you downloaded the Signal messaging app? If that's a yes, then we have another question, are you using it regularly? After WhatsApp introduced its new privacy policy, a lot of people shifted to using Telegram and Signal as alternatives. But as many have installed Signal, they are not really using the messaging application as expected. This has become the target of funny memes and jokes online as everyone has downloaded it but no one's using it. A couple of days ago, the messaging app went down following millions of people rushing to download it. However, the buzz seems to have died down.

Right after WhatsApp introduced its privacy policy, a lot of concerns came up about user's data. The Facebook-owned messaging application is doing all that it can to retain the users, even delaying their policy further. However, users seem to have found an alternative in Signal, but have they really? Not everyone has shifted to Signal, and although it guarantees more secure and private messaging, there are a lot of features still missing. With Hike messenger also shutting down, people bid an emotional goodbye to the sticker chat. So Signal App is emerging as an alternative, but are people really using it? The memes suggest otherwise. How to Download Stickers on Signal App? Know Steps to Get WhatsApp-Like Animated Emojis on Latest Messaging App.

Signal app lying unused in phone after being downloaded pic.twitter.com/83y4N6Xi59

Everyone after downloading Signal app pic.twitter.com/TiAj61FizK

When you download Signal App and still use WhatsApp..

Signal App has been a target of memes and jokes in the past week as well, but this time the memes are on how no one is really using the app. Well, can you relate? If yes, then don't forget to share these memes and jokes online, on the Signal app.

(The above story first appeared on LatestLY on Jan 19, 2021 04:10 PM IST. For more news and updates on politics, world, sports, entertainment and lifestyle, log on to our website latestly.com).