Smiling Volcano in 2020? Old Video of Hawaii's Kilauea Volcano Forming a Smiley Face During Eruption Has Resurfaced on Social Media

A video of a volcanic eruption forming a smiley face with the lava has been doing the rounds on Twitter. It is the video is of Hawaii's Kilauea Volcano, which formed a mysterious smiley shape back in 2016. The same clip has been shared online and people are deeming it perfect what Nature has given and its course in this year. 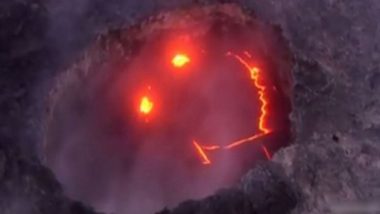 The year of 2020 is throwing one crisis after another. While we are already fighting a global pandemic, forest fires, earthquakes, oil spills or volcanic eruptions are being reported from around the world. It all feels like being a part of an apocalyptic movie. Now a video of a volcanic eruption forming a smiley face with the lava has been doing the rounds on Twitter. It is the video is of Hawaii's Kilauea Volcano, which formed a mysterious smiley shape back in 2016. The mysteriously remarkable sight was captured by Mick Kalber of helicopter tour company Paradise Helicopters. The same clip has been shared online and people are deeming it perfect of what Nature has given and its course in the year 2020. Mount Sinabung Volcano Erupts in Indonesia; Check Pics and Videos of Volcanic Ash Forming Massive Clouds and Darkness in the Sumatran Island Region.

The Kilauea Volcano in Hawaii has been erupting since the year 1983 and is among the most active volcanoes in the world as per US Geological Survey. During an eruption four years ago, the lava lake, in Pu’u’O’o crater formed two circular bubbles of lava and a crack that looked like a smiley face. A helicopter touring company caught this incredible sight on video. It was also the first time in three years the lava from this volcano had reached the Pacific Ocean. Twitter user Domenico posted the footage again calling it recent occurence and since then it is going viral again. The video has been shared on Twitter again with captions like "2020 is laughing at us." Filipino Couple Gets Married With Dramatic Taal Volcano Smoke Cloud in the Background; Surreal Wedding Pics Go Viral.

Hawaii's Kilauea volcano, one of the world's most active, recently formed a smiley face in its over 24-metre deep crater during an ongoing eruption.

Sums up The Year

This is however, not a recent video and some people have noted it in the comments as well. So if you come across this on your timelines, do bring it to the notice that it is an old video.

It is the same footage which is going viral again. So do not worry, the Kilauea Volcano is not smiling at you for what's more to come. But it is indeed an incredible sight in nature.

(The above story first appeared on LatestLY on Sep 05, 2020 05:32 PM IST. For more news and updates on politics, world, sports, entertainment and lifestyle, log on to our website latestly.com).