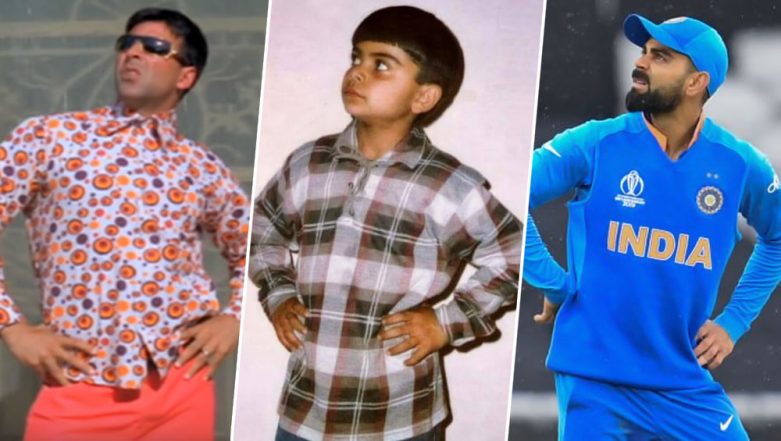 If there is one thing that has still gripped the netizens in India is the Indian cricket team's win over Pakistan in ICC Cricket World Cup 2019. Since then memes are flooding on the internet about the Ind Vs Pak game. The game also saw a brief spell of rain showers which also affected the match. And almost everything that happened during this match, from Virat Kohli's expressions to Sarfaraz Ahmed's yawning, everything became a meme format. One of the very popular pictures that even ICC and Kohli himself couldn't resist sharing was Virat Kohli's posture on the field as it started raining. Soon, a comparison was drawn between Virat Kohli and Akshay Kumar's picture from the film Phir Hera Pheri began. Well, while the meme format of Akshay Kumar's character Raju has emerged now, Virat Kohli has an exact same picture from his childhood. So we wonder, who did it first and who was better at it? India vs Pakistan Funny Memes and Jokes Flood Twitter After Virat Kohli's Team India Beat Sarfaraz Ahmed's PAK by 89 Runs Via DLS Method.

During the Ind Vs Pak CWC match, when it started drizzling, Indian captain Virat Kohli struck the exact same pose looking up in the sky, like Raju from Phir Hera Pheri. And for the folks on the internet, it did not take long to spot the resemblance. But that's not all, Virat Kohli himself shared another picture which has a childhood picture of him in the exact same way. From ‘Kal Raat Ye Log Burger, Pizza Kha Rahe The’ to Sarfaraz’s Yawn, Pakistani Fans Troll Their Own Team After Humiliating Defeat Vs India in ICC CWC 2019! Watch Viral Videos.

Here is the Meme Shared by Virat Kohli About His Own Pose From Childhood:

And well, we can clearly spot the resemblance between not just Virat and his childhood picture, but also with Akshay Kumar. So the question remains, who nailed it? Or rather was it Virat Kohli inspiring Raju all the while? Nevertheless, we love memes!