Lakshya Sen Birthday Special: 8 Lesser-Known Facts About the Indian Shuttler You Should Know As He Turns 21 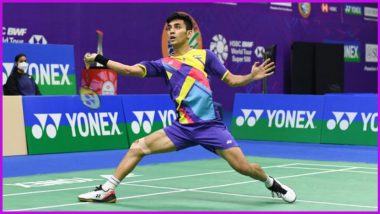 Lakshya Sen is an Indian badminton player born in Uttrakhand, India, on August 15, 2001. The shuttler currently ranks tenth in the world in men’s singles and his highest rank (9th) came in march 2022. Along with his outstanding performance at the youth level, the youngster has also proved himself at major global events. He has won a bronze medal at the 2021 BWF world championship and snatched gold in men’s singles at the 2022 Commonwealth Games along with a silver in the mixed doubles event. BWF World Championships 2022 Schedule: Date, Time in IST and All You Need To Know About the Badminton Tournament.

The rising star will be celebrating his 21st birthday on August 16, so let us take a look at some lesser-known facts about him.

(The above story first appeared on LatestLY on Aug 15, 2022 02:31 PM IST. For more news and updates on politics, world, sports, entertainment and lifestyle, log on to our website latestly.com).