In a recent interview with CBS Sports’ State of Combat Podcast, De La Hoya said that it would take him just two rounds to defeat Conor McGregor if they ever faced in a boxing ring. The UFC star took to his social media to respond to the challenge laid out by the former boxer as he said ‘‘I accept your challenge, Oscar de la Hoya.’ 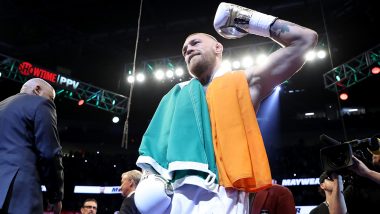 Conor McGregor looks ready to make a return to the boxing ring after he accepted the challenge from former boxer Oscar De La Hoya. The Irishman made his debut in the boxing ring against Floyd Mayweather in August 2017, where he lost in the tenth round. However, McGregor looks set to make a comeback after, De La Hoya, who retired in 2009, claimed that he can knock the MMA fighter in less than two rounds. Conor McGregor's Dance in Party to Celebrate His Unbelievable Victory Against Donald Cerrone in UFC 246 is Too Good to Be Missed.

In a recent interview with CBS Sports’ State of Combat Podcast, De La Hoya said that it would take him just two rounds to defeat Conor McGregor if they ever faced in a boxing ring. ‘Oh come on, brother. Two rounds. One thing about me is I went for the kill, always.’ He said. Mike Tyson Weight Loss: Boxing Legend’s Dramatic Body Transformation As He Prepares for Return.

Conor McGregor himself has expressed his desire to return to the boxing ring and we could be seeing it soon enough. The Irishman recently made his much-awaited return in the octagon as he defeated Donald ‘Cowboy’ Cerrone in the very first round at UFC 246.

However, De La Hoya will be a different proposition altogether. The American has an impeccable record in the boxing ring and has recorded 39 wins in 45 fights while taking multiple world titles across six different weight classes.

(The above story first appeared on LatestLY on May 08, 2020 09:49 AM IST. For more news and updates on politics, world, sports, entertainment and lifestyle, log on to our website latestly.com).