Australia are well within reach of a 2-0 lead in the five-match Test series with Mitchell Starc dismissing England captain Joe Root on the last ball of the fourth day. The hosts need six more wickets to win the pink-ball Test match. 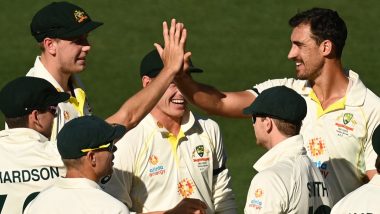 Australia find themselves well in sight of a win in the second Ashes Test as they have England reeling at 82/4 at the end of the fourth day in Adelaide on Sunday. The bonus for Australia, something that have increased their chances of a quick victory on Day 5 is the dismissal of Joe Root, which came on the last ball of the day bowled by Mitchell Starc. England have to get 386 more runs on the last day to snatch an unlikely win while Australia would look to scalp all six remaining wickets to wrap things up in style and secure a 2-0 series lead. England received a jolt earlier in the day with skipper Root injured. That left the visitors with no spin bowling option with Ollie Robinson finally rolling his fingers on the ball. Ollie Robinson, England Pacer, Bowls Off-Spin During Day 4 of Pink-Ball Ashes Test in Adelaide (Watch Video)

Although Robinson did not get a wicket off his spin bowling, England somehow managed to not let Australia run away with the game. Root returned to snare two wickets while Dawid Malan got into the act as well, dismissing Marnus Labuschagne (51) as Australia declared at 230/9. Travis Head also scored a quick 51 off just 54 balls. England, with a target of 468 runs to win, began poorly once again with Haseeb Hameed falling in the second over itself. Although Rory Burns (34) and Malan (20) tried to rebuild the innings, it was not enough as the Australia pacer ran in to rattle the English batting once again. Jhye Richardson was the best bowler with two wickets with Michael Nesser claiming one. Not to forget Starc, who got the prized wicket of Root to put Australia completely in control and on top, in touching distance of a victory.

Take a look at some stat highlights of the match:

Australia would plan on taking out the last six English wickets as soon as possible on the fifth day and cancel out any chances of the visitors staging a fightback. A lot would depend on comeback man Ben Stokes, Ollie Pope and Jos Buttler if England are to save this Test from this difficult position.

(The above story first appeared on LatestLY on Dec 19, 2021 06:18 PM IST. For more news and updates on politics, world, sports, entertainment and lifestyle, log on to our website latestly.com).