With Brendon McCullum bidding goodbye to Kolkata Knight Riders after three eventful years to take up his assignment as England's red-ball head coach, his former teammate in the New Zealand side, pace bowler Matt Henry, feels the former Black Caps skipper will do a "fantastic job" in his new assignment. 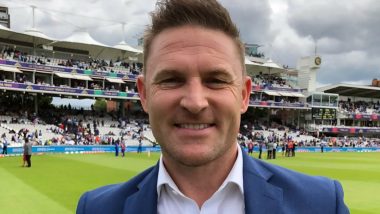 Mumbai, May 20: With Brendon McCullum bidding goodbye to Kolkata Knight Riders after three eventful years to take up his assignment as England's red-ball head coach, his former teammate in the New Zealand side, pace bowler Matt Henry, feels the former Black Caps skipper will do a "fantastic job" in his new assignment. Henry added that McCullum would be the perfect coach to bring England out of one of their worst Test slumps, where they have won just one of their 17 games. Brendon McCullum Reacts After Being Appointed As England Coach, Says 'It’s Been an Emotional Couple of Days'.

"I absolutely loved playing under Brendon," said Hennry, who has more than 100 ODI wickets for New Zealand, on SENZ Mornings on Friday. "He was a fantastic captain and leader of a group. I think one of his real strengths is rallying the guys together. I think he'll do a fantastic job for England. I think that piece of bringing everyone together and driving towards that common goal was something that he really did well with our team. He created a great environment and laid a really strong foundation of where we are today.

"There's no question that he will do a great job with England. He'll be looking forward to coming to England and getting to know his squad and the people. I'm sure everyone will be looking forward to seeing him." McCullum ended his KKR stint on a bittersweet note on Wednesday as his side was eliminated from IPL 2022, losing to Lucknow Super Giants by just two runs in their case of 210. McCullum saw KKR's turnaround from winning two games from the first seven games last season to winning the next five to eventually finish as the runners-up. Brendon McCullum Will Bring a Sense of Security, Identity to England, Says Abhishek Nayar.

"It was three years ago when Venky (Mysore, KKR managing director) took a chance on me as a coach and since then it's been a pretty steep learning curve and I have enjoyed every moment of it, even the tough times have been great learning opportunities as well," said McCullum in his parting message. "I know seasons don't always pan out how you want them to pan out. But I just love all the efforts that you guys put in. My style of coaching, as you know, is not necessarily about cricket. It's more about life and about relationships and about trying to give you guys confidence and to be able to take away some of the pressures and anxieties in the game. I feel you guys have trusted me to able to help you out. So, thank you for that," added the New Zealander.

"Well, it's not always easy when coaches come and go. But whatever happens, my number is available as well. Feel free to give me a call at any stage and I'll keep following all your careers and certainly the franchise in particular. I'll be following from afar as well. And skipper, it's your franchise to run as well, so all the very best," added McCullum.

(The above story first appeared on LatestLY on May 20, 2022 02:07 PM IST. For more news and updates on politics, world, sports, entertainment and lifestyle, log on to our website latestly.com).