CSK Playoff Chances: MS Dhoni-led Team Not Yet Out of Final Four Contention, Here's How Chennai Super Kings Can Make it to Next Stage of IPL 2020

Chennai Super Kings have been very much unlike themselves in IPL 2020 as the three-time champions are in a position which is completely foreign to them. A team which has qualified for play-offs every time it has played in the cash-rich league now looks at the possibility of early elimination if things do not change quickly. 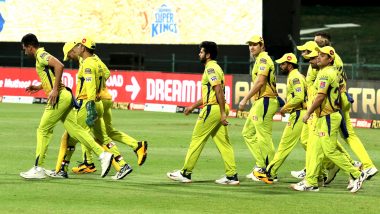 Chennai Super Kings are the most consistent team in the history of the Indian Premier League, however, this season the MS Dhoni-led side are enduring a difficult campaign and find themselves at the bottom of the points table. The three-time champions have won just three of their 10 games this season and a final four finish is looking highly unlikely. But CSK aren't completely out of the play-off race as there is still hope. IPL 2020 Playoff Scenario and Latest Points Table: Here's What Each Team Needs to do to Qualify for Final Four.

Chennai Super Kings have been very much unlike themselves in IPL 2020 as the three-time champions are in a position which is completely foreign to them. A team which has qualified for the playoffs every time it has played in the cash-rich league, now looks at the possibility of an early elimination if things do not change quickly. With four points adrift of the final playoff spot, here is how CSK can still qualify for the knockout phase of the competition. CSK Skipper MS Dhoni Slammed For 'Spark' Comment About Youngsters Following Defeat Against RR in IPL 2020.

How Can CSK Qualify For IPL 2020 Playoffs?

Chennai Super Kings have just six points on the board after 10 games in IPL 2020 and find themselves at the bottom of the team standings. With four games left to play in the league stage, CSK must treat every match as a must-win encounter, which means they need to be fault-less, a thing they haven’t managed until now.

If Chennai are to win their remaining games, it will move them to 14 points. Though 16 points all-but guarantee a play-off spot, with 14 points, CSK might still have a chance of making it into the final four if other results are kind to them. The three-time champions cannot afford any more slip-ups if they want to keep their playoff qualification run going.

Chennai Super Kings are yet to play the likes of Mumbai Indians, Kings XI Punjab, Royal Challengers Bangalore and Kolkata Knight Riders. All these teams have been shown their quality over the course of the season and it would be a difficult task for CSK to win all those games, but not impossible.

(The above story first appeared on LatestLY on Oct 20, 2020 10:20 AM IST. For more news and updates on politics, world, sports, entertainment and lifestyle, log on to our website latestly.com).