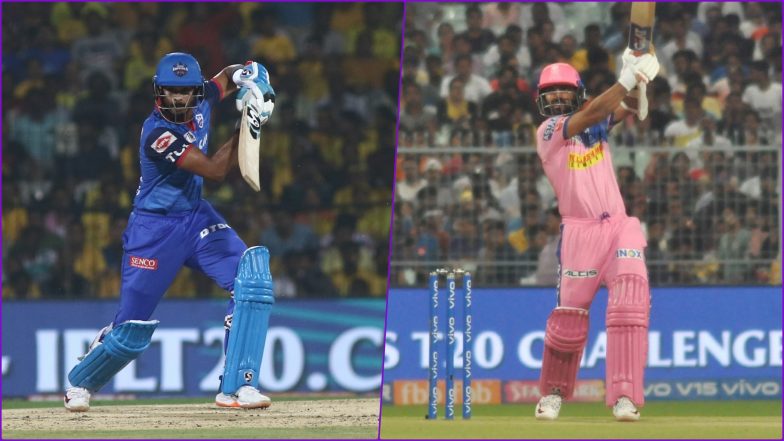 The point Rajasthan Royals (RR) got in Bangalore keeps them mathematically in the race for top four of the 2019 Indian Premier League (IPL). The game was also Steve Smith’s last appearance of the season in a Rajasthan shirt, and it will be interesting to see if the management goes back to Ajinkya Rahane to lead the team in a crucial phase. Opponents Delhi Capitals (DC) have qualified for the next stage of the league, but the desire to finish as high as possible will get them going. The teams have faced each other 19 times, with Delhi winning eight games and Rajasthan registering 11 victories. Here we have a quick look at how these teams performed in their last five encounters. DC vs RR, IPL 2019 Match 53 Preview: Delhi Capitals Look to Seal Top Spot in Playoff Against Rajasthan Royals.

Ajinkya Rahane’s century went in vain as his team threw the initiative once with the bat and then with the bowl in the second innings. Rajasthan’s score of 191/6 did little justice to the batting of Ajinkya Rahane and skipper Steve Smith as they should have put on above 200. Delhi were led by Rishabh Pant’s 78 in the chase, but RR bowlers could have done more to avoid a defeat.

Rain hampered Delhi’s first innings as they posted a score of 196/6 on board in 17.1 overs with Rishabh Pant top scoring with 69. The game was reduced to 12 overs with Rajasthan needing 151, but despite a brilliant opening performance, they fell short of 4 runs. Trent Boult did well in his three overs picking up a brace.

Another rain-curtailed game involving these two but this time it was the Rajasthan Royals who was victorious at the end of it. In the 17.5 overs of cricket in the first innings, the home team put 153/5 on board thanks to a spirited 45 from skipper Ajinkya Rahane. But Delhi’s chase lasted for only six overs as rain played spoilsport again handing over the game to the Royals.

An unbeaten 91 by Ajinkya Rahane and Karun Nair’s 61 propelled Rajasthan Royals to a score of 189/2 in their quota of twenty overs. Delhi’s response was not very impressive as they kept on losing wickets, but JP Duminy held the fort at one end. His efforts proved to be futile in the end as Delhi lost the game by 14 runs. James Faulkner was the pick of the bowler for Rajasthan ending with figures of 22/2 in four overs.

Chasing 185 for victory, Rajasthan lost their way a bit at 78-4, but then Deepak Hooda and Ajinkya Rahane steadied the ship with a brilliant partnership. When the wicket of Deepak Hooda fell, 19 runs off 11 balls and had to rely on South African all-rounder Chris Morris to get them over the crossing line. Imran Tahir was the pick of the bowlers for the home team with figures of 28/4 in his spell.

Rajasthan will be weakened by the loss of Steve Smith but have enough firepower to get the two points against an unpredictable Delhi side.