Needing five runs to win off the last ball, Shahrukh Khan smoked a six to seal a successful title defense for Tamil Nadu in the Syed Mushtaq Ali Trophy 2021 final against Karnataka. Karthik lauded these young players and also credited the Tamil Nadu Premier League and Indian Premier League for their growth. 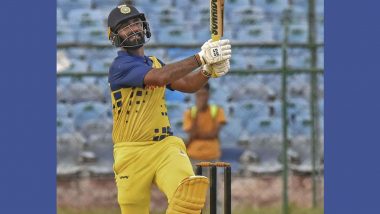 Shahrukh Khan's amazing last-ball six to win the Syed Mushtaq Ali Trophy for Tamil Nadu is still fresh in the memories of cricket fans and his cameo (33* off 15 balls) has impressed many including Dinesh Karthik. The veteran wicketkeeper was elated at the young finisher winning the game in style and credited the Tamil Nadu Premier League and the Indian Premier League for their impact on the Tamil Nadu cricketers. Responding to a tweet by noted commentator Harsha Bhogle, Karthik wrote, "I feel TNPL has helped and also the fact that this set of boys wanted to DESPERATELY be part of IPL and from there hopefully move on to play for Team India. 3 years ago we had 7 players in IPL from TN, Last year there were 14. So I'm thinking it's worked both ways." Shahrukh Khan Last Ball Six Helps Tamil Nadu Win Syed Mushtaq Ali T20 Trophy 2021, Beat Karnataka in Final by Four Wickets

Take a Look at Their Conversation Here:

I feel TNPL has helped and also the fact that this set of boys wanted to DESPERATELY be part of IPL and from there hopefully move on to play for Team India.

So I'm thinking it's worked both ways 😊❤️👍 https://t.co/VZETlQKdXJ

Karthik mentioned that as years have passed by, more Tamil Nadu cricketers are making it into IPL teams as they wanted to be part of this big tournament where good and consistent performances can often lead to a national call-up. In a series of tweets, he also congratulated the Tamil Nadu side for their spectacular win in the final against Karnataka. Take a look at what he wrote: MS Dhoni Watches Syed Mushtaq Ali Trophy 2021 Final As Shahrukh Khan’s Last-Ball Six Wins It for Tamil Nadu (See Picture)

Two years ago , lost in the last ball in a final and to dig deep n find a way to win against the same opponent on the Last ball was great too watch. Well done to Karnataka on a brilliant tournament and very well done to @TNCACricket on defending the title.❤️🌟 #smat2021

Here He Lauds Sai Kishore for His Efforts With the Ball and Shahrukh Khan, for His Explosive Batting:

The final solely belongs to 2 players from Tamilnadu, @saik_99 with the ball and @shahrukh_35 with the bat, and it was fitting to see them both at the crease WINNING it for @TNCACricket at the end.

So so happy for another fantabulous season and defending our title.

The boys owned the season with a top-notch display of cricket. 👏

Young cricketers from Tamil Nadu have constantly made an impact in the IPL over the years. From Washington Sundar, Varun Chakaravarthy to Shahrukh Khan, Vijay Shankar and also T Natarajan, these young cricketers performed well to give an example of the abundance of talent in the state. Karthik himself has been one very big example as well, having represented India at the highest level, in all three formats.

(The above story first appeared on LatestLY on Nov 22, 2021 08:49 PM IST. For more news and updates on politics, world, sports, entertainment and lifestyle, log on to our website latestly.com).