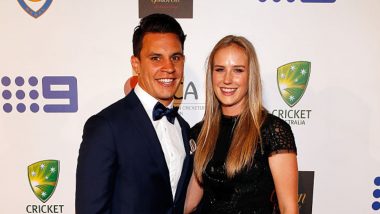 Australian women's cricketer Ellyse Perry and her husband Matt Toomua, Australian Rugby player, have decided to part ways. The sporting couple in a statement announced that they separated earlier this year. The duo got married in December 2015. Earlier this year, there were rumours of their separation after the Australian cricketer was spotted without her wedding ring at the Australian Cricket Awards in Melbourne. However, the pair released a statement back then and said, "we have a strong love and respect for one another, and any report that our marriage has ended is incorrect." Usman Khawaja, Wife Rachel Blessed With a Baby Girl; Couple Names Her Aisha (See Pic).

Now in the latest statement, the duo announced their separation after being together for over four years. "It's with the greatest of respect for one another that we decided to separate earlier this year," the statement read.

"We felt this was the right course of action and is in the best interests of each other and our current lives. This is something that has evolved and is a mutual decision. Throughout our relationship, we have remained private, and we ask that our space and privacy continue to be respected during this difficult time for both of us," it added further.

When things get too competitive 🛑🤢 @m.toomua

The pair were last seen together in May when Toomua appeared in an Instagram post by Ellyse following a workout session together. Ellyse was part of the Australian team that lifted the ICC Women's T20 World Cup 2020 earlier this year, and since then due to coronavirus pandemic, she has been out of action. Toomua, on the other hand, is currently playing for Melbourne Rebels in the Super Rugby 2020.

(The above story first appeared on LatestLY on Jul 26, 2020 01:07 PM IST. For more news and updates on politics, world, sports, entertainment and lifestyle, log on to our website latestly.com).