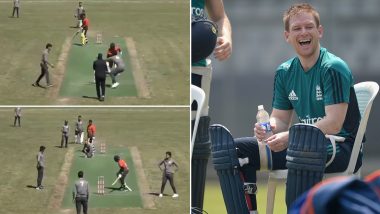 International cricket is back in England after the COVID-19 halt as the Three Lions are taking on West Indies in a three-match Test series. However, England’s limited-overs captain Eoin Morgan, who’s not the part of the Test team, will still have to wait for some more time in order to get back in action. In the meantime, the southpaw is expected to cheer his team from home. Recently, however, Morgan shared a clip of another cricket match on Twitter which will leave any lover of the game in splits. In the video, some bizarre fielding has been showcase which also tickled the funny bones of the 33-year-old. Moeen Ali, Jonny Bairstow Named In England's 24-Man Training Group for Ireland ODIs.

“This is awesome,” wrote the 2019 World Cup-winning captain along with three laughing emojis while sharing the video on the micro-blogging website. Speaking of the comedy of errors in the clip, the wicket-keeper drops a straight-forward catch. After that, however, he throws the ball to the stumps which the fielder fails to collect and the ball goes for overthrows. On one occasion, a fielder gets the opportunity to run the batsman out. However, he misses the stumps despite standing at a small distance. Well, Morgan, who himself is a brilliant fielder, couldn’t resist after watching the video and shared it with his fans. England vs West Indies, 1st Test 2020, Day 2 Stat Highlight: Jason Holder Registers Career-Best Figures.

Meanwhile, Morgan’s next assignment will get underway when England will host Ireland in a three-match ODI series, starting from July 30. Although, the squad hasn’t been announced the England Cricket Board have named the 24-Man Training Squad which Morgan being named as a captain. Well, it will the first limited-overs series after the COVID-19 break and both the sides will look to leave a mark.

(The above story first appeared on LatestLY on Jul 10, 2020 02:57 PM IST. For more news and updates on politics, world, sports, entertainment and lifestyle, log on to our website latestly.com).