India beat England by 10 wickets to win the day-night Test and take an unassailable 2-1 lead in the four-match Test series with a game remaining. Axar Patel and Ravichandran Ashwin were the stars for India with the ball. Axar took 11 wickets in the game while Ashwin completed 400 Test wickets to join an illustirous club. 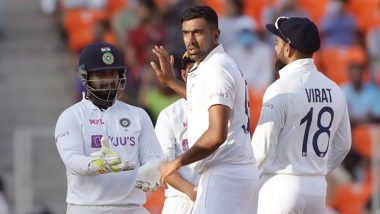 India beat England by 10 wickets to win the third Test and take an unassailable 2-1 lead in the four-match series. The win makes India favourites to reach the ICC World Test Championship while England have been ruled out from the contention of the WTC final. England slumped to their lowest total in Test matches against India after being bundled for just 81 runs in the second innings of the Test. India were set a 49-run target and they romped home in 7.4 overs with 10 wickets in hand. Take a look at the records and stat highlights from the India vs England third Test match. India vs England 3rd Test 2021 Day 2 Highlights.

Axar Patel picked his maiden 10-wicket haul in the Test match and also achieved his best-ever figures in Test cricket. Axar finished the third Test with figures of 11/70 making it the best ever figures in a day-night Test match. The 27-year-old has also picked a third consecutive five-wicket haul in Test matches.  India vs England Day-Night Test Becomes the Shortest Completed Test Match Since the Second World War.

While Axar achieved a 10-wicket haul, Ashwin took seven wickets in the Test and also completed 400 wickets in the match becoming the fastest Indian to reach that landmark. Take a look at the other records and stat highlights from the Test match.

# Virat Kohli surpassed MS Dhoni for most Test wins by an Indian captain on home soil. Kohli now has 22 Test wins in 29 matches as captain in India overtaking Dhoni’s 21 wins in 30 Tests

# He is also the fourth Indian bowler after Anil Kumble, Kapil Dev and Harbhajan Singh to reach the 400-wicket mark

# Joe Root took his first five-wicket haul in his international career. His figures of 5/8 is also his best Test figures

India have now taken an unassailable 2-1 lead in the four-match series and can clinch the series if they avoid a defeat in the fourth Test. England, on the other, need a win to draw the Test series. Joe Root’s men have been knocked out from the World Test Championship final.

(The above story first appeared on LatestLY on Feb 25, 2021 08:58 PM IST. For more news and updates on politics, world, sports, entertainment and lifestyle, log on to our website latestly.com).