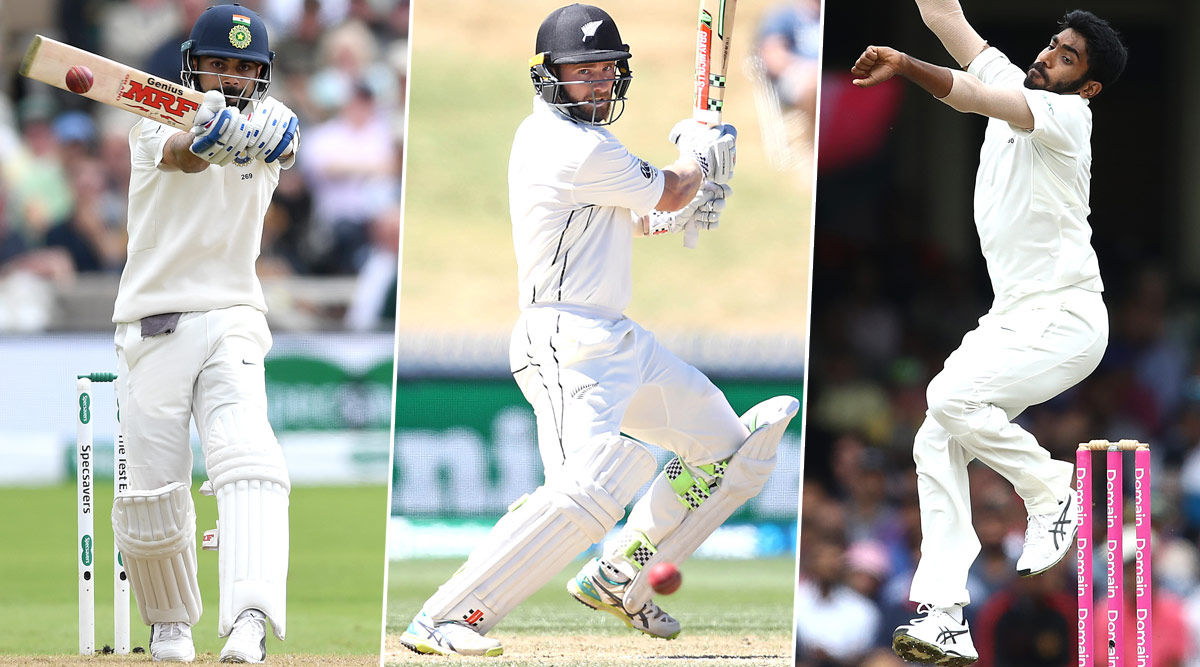 India will face New Zealand in the 1st game of two-Test series at Wellington hoping to clinch their maiden Test series win in Kiwi land. The India vs New Zealand 1st Test match will begin on February 21, 2020 (Friday). India thrashed New Zealand 5-0 in the T20I series and the hosts returned the favour in three-match ODI series both sides will, however, have more than wanting to outplay each other in the Test series. The ICC World Test Championship have changed the course and interests Test cricket holds in current times. India are at the peak of the World Test Championships points table after 7 Test matches while New Zealand are 300 points behind with two Tests in hand. As both sides prepare to face each other in 1st Test at Wellington, we take a look at some key players who can decide the results. New Zealand Vs India, Cricket Score 1st Test Match.

This could have very well been the World No 1 vs 2 Test series but New Zealand's 0-3 drubbing at the hands of Australia and England's 3-1 in South Africa, pulled the Kiwis to fourth in the Test rankings. Elsewhere, India under Virat Kohli have been in terrific form in Test cricket in the last two years. Their last Test series defeat came in England in August 2018 and since then Kohli's have recorded Test series win in Australia, thrashed West Indies home and away, dusted South Africa at home and finally blown Bangladesh in their final Test series on 2019.

New Zealand had been doing the same under Kane Williamson but for a longer period. Since their 1-0 defeat to South Africa in the summer of 2017 and until their 0-3 white-wash in Australia, Williamson's New Zealand have played 15 Tests, drew 3 and lost only 2. The emergence of Neil Wagner for the Kiwis and Jasprit Bumrah for India have produced similar results for both teams. Ahead of the 1st IND vs NZ Test, take a look at some key players, whose performances will determine which way this Test match proceeds.

Kohli scored a hundred in his last Test innings in New Zealand, which incidentally was also in Wellington. That was way back in 2014 and Kohli was still making inroads into Test cricket. He is now the World’s No 1 batsman in Test cricket and has already conquered the toughest grounds in the longest format of the game. In four Test innings in New Zealand, Kohli has 214 runs with an unbeaten century and a fifty. After his master knocks in Australia and England, the run-machine will hope to dominate New Zealand’s famed pace-bowling trio.

He struggled for form in 2019 Test cricket with only two centuries and as many fifties in 12 Test innings last year. Kane Williamson also failed to score a single half-century in his last Test series, which was in Australia, with New Zealand suffering a 0-3 whitewash on the other side of the trans-Tasman border.

His rise in international cricket has been staggering. Bumrah since his debut for India in 2016 has left everyone in awe. He is already India’s first choice in ODI and T20I cricket and within a year in Test cricket, his stock has risen. He took 48 wickets in only 8 Test matches in debut year, all of which came in South Africa, England and Australia. He is the first Asian bowler to achieve five-wicket hauls in South Africa, England and Australia in the same calendar year.

But if there is a team the 26-year-old has struggled again it has been New Zealand. In 21 matches against the Black Caps, Bunrah has taken 23 wickets. He went wicketless in the three-match ODI series and took eight wickets in the five-match T20I series. Bumrah will be making his Test debut in New Zealand.

Wagner is one of the only seven New Zealand bowlers to take 200 or more Test wickets and he has reached there in only 47 Test matches. The 33-year-old was New Zealand’s best bowler in the 0-3 drubbing in Australia and took at least three wickets in each innings barring the final innings at Sydney.

That outing in Sydney, where he finished with no wickets in nine overs, also halted Wagner’s record of 10 successive innings of taking at least three wickets. He also has good track against India and took 11 wickets in two Test matches when both teams last met in 2014. He will skipper Kane Willamson’s trump card against Virat Kohli.

His is a three-match Test career and all of them have in the dead pitches of India. But Prithvi Shaw, who led India to U19 World Cup victory in New Zealand, have in that short career shown why he is so highly rated as a future Indian batting great. Shaw struck a hundred in his debut Test innings and followed it with another 70 in his next. This will be the first time he will be playing an international Test match outside the subcontinent.

Shaw got a taste of what it could be like to opening the batting against Trent Boult, Tim Southee and Neil Wagner in the ODI series. Boult and Wagner weren’t there in the ODI series but Shaw opening alongside Mayank Agarwal – the pair are expected to open in 1st Test as well – fluffed, scoring a total of 84 runs in three ODIs with a high-score of 40.