India are closing in on a massive win at the Wankhede stadium, which would hand them the series as the first match ended in a draw. The match starts art 9:30 am IST with New Zealand banking on the pair of Rachin Ravindra and Henry Nicholls to make a difference. 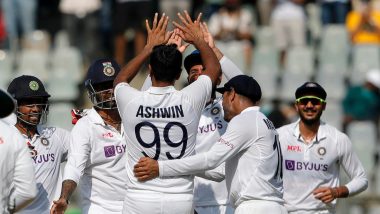 After another dominant performance on the third day, India would be eyeing to close off the match on Day 4 of the second Test at the Wankhede Stadium in Mumbai on Monday, December 8. India set a mammoth 540-run target for the Kiwis to chase down with two and a half days play remaining and they got exactly what they had wanted. Five New Zealand wickets fell and now, the visitors are staring down the barrel and a potential defeat, if the remaining batsmen are unable to pull off a memorable performance with the bat in hand. The Kiwis lost five wickets on Day 3, three of which fell to Ravichandran Ashwin, who crossed the milestone of having taken more than 50 Test wickets in 2021. Axar Patel was the other wicket-taker with one more being a run-out. New Zealand would rue the dismissals of Daryl Mitchell, who looked good after a fighting 60-run knock and also the experienced Ross Taylor, who was expected to play a huge role in this run-chase but failed to deliver. Ravichandran Ashwin Surpasses Anil Kumble and Harbhajan Singh To Script Unique Record During Day 3 of India vs New Zealand 2nd Test 2021

The World Test Champions have Rachin Ravindra (2*) and Henry Nicholls (36*) at the crease and they would hope, against all odds that this pair would pull off a resistance that would somehow ensure that the spoils are shared. But going by the form India are in, a win for them is the only possible outcome of this match as things seem at the moment. Nonetheless, an exciting day of action awaits fans on Day 4 at the Wankhede Stadium.

India vs New Zealand 2nd Test Day 4 will be played at the Wankhede Stadium in Mumbai on December 05, 2021 (Sunday). The game has a scheduled start time of 09:30 am IST (Indian Standard Time).

Where To Watch Live Telecast Of India vs New Zealand, 2nd Test, Day 4 on TV?

Star Sports are the official broadcasters of the IND vs NZ Test series 2021 in India and will be telecasting the games live on its channels, Fans can tune into Star Sports channels to watch India vs New Zealand 2nd Test match Day 4 telecast on their TV sets.

How To Get Free Online Live Streaming Of India vs New Zealand, 2nd Test Day 4?

Disney+ Hotstar, the official OTT platform for Star Sports, will provide the live streaming of the IND vs NZ Test series 2021 on online platforms in India. Fans can tune into the Disney+ Hotstar app and website to India vs New Zealand 2nd Test match Day 4 online.

(The above story first appeared on LatestLY on Dec 06, 2021 06:30 AM IST. For more news and updates on politics, world, sports, entertainment and lifestyle, log on to our website latestly.com).