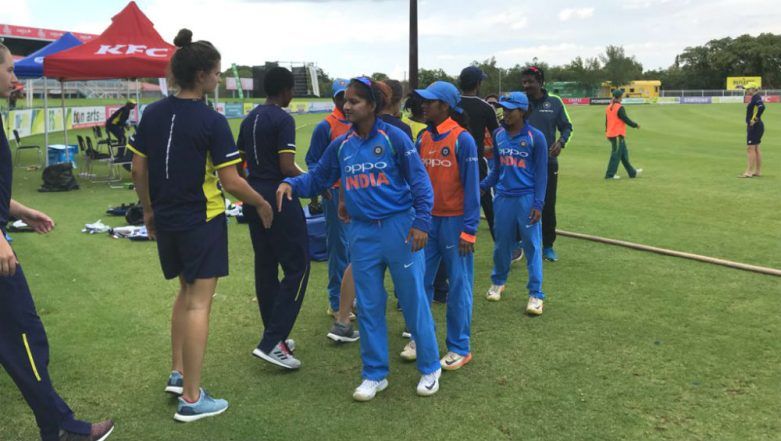 Potchefstroom, Feb 12: The ODI series triumph was offset slightly by a loss in the closing match but that would hardly dent the Indian women's cricket team's confidence as it heads into a five-game Twenty20 rubber against South Africa, starting here tomorrow. The live telecast of the match will start at 04:30 PM.

After commanding victories in the first two ODIs, Indian women lost by seven wickets in the third ODI here last Friday. The loss, however, hardly made any difference as the Indians had pocketed the three-ODI series by then.

The defeat definitely came as a jolt but Indian women would look to shrug off the disappointment and make a winning start to their T20 campaign here. The visitors were at their dominating best in the first two ODIs, recording huge 88 and 178-run wins before slumping to the loss.

While the Mithali Raj led side in the ODI series, the T20s will witness a new captain in the explosive Harmanpreet Kaur. Harmanpreet will be assisted by in-form batswoman Smriti Mandhana.

India would also be bolstered by the inclusion of T20 specialist Anuja Patil and debutant all-rounder Radha Yadav and wicketkeeper Nuzhat Parveen in the squad. The T20 squad also features 17-year-old Mumbai player Jemimah Rodrigues, who had grabbed headlines after scoring 202 in 163 balls in an Under-19 game.

After a rare failure in last ODI, the Indians would be relying heavily on Mandhana to provide a solid start to the innings. Deepti Sharma and Veda Krishnamurthy, who made 79 and 56 respectively in a losing cause in the last match, would be hoping to carry on their good form in the shortest format.

India's success also relies heavily on skipper Harmanpreet and Mithali Raj's contributions. On the bowling front, veteran Jhulan Goswami is expected to return to the playing eleven after being rested for the third ODI.

In Jhulan's absence, the Indian bowling attack lacked sting in the last match as Mignon du Preez scored a valiant 90 to pull off a consolation win for South Africa.

Du Preez was ably assisted by opener Laura Wolvaardt (59) as the duo laid the foundation for a successful run chase. Among the South African bowlers, left-arm pacer Shabnim Ismail would look to carry on her impressive form. She did the maximum damage to India in the last ODI picking up four wickets while conceding just 30 runs from her nine overs.