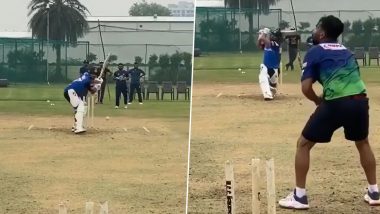 Cricket fans are counting days as the 2020 edition of the Indian Premier League (IPL) is set to begin on September. Players are all the franchises are excited and are leaving no stones unturned in their preparation for the marquee tournament. Delhi Capitals’ wicket-keeper batsman Rishabh Pant is also one of them and the last Instagram video of the franchise in the proof of the fact. In the clip shared by the Delhi-based team, the left-handed batsman can be seen taking the bowlers to the cleaners in the practice session. Be it pacers or spinners, Pant looked confident against every sort of bowlers which is certainly not a great news for the opposition teams. Shikhar Dhawan Starts Preparation for Upcoming Season in UAE.

“We are falling short of adjectives to describe these shots,” wrote Delhi Capitals while sharing the video on the picture-sharing website. Lately, the swashbuckling batsman has been practising with Suresh Raina and is expected to do well in the upcoming marquee tournament. Meanwhile, let’s look at how Pant is gearing up ahead of IPL. Rishabh Pant Plays ‘MS Dhoni Helicopter Shot’ As Delhi Capitals Star Prepares.

We are falling short of adjectives to describe these 🔥 shots! Dilliwalon, help us out here 👇🏻 #YehHaiNayiDilli

So far, the star batsman has scored 1736 runs in 54 IPL matches at an average of 36.17. Notably, during this time, he had a staggering strike rate of 162.7. Well, these numbers clearly reflect Pant’s prowess and the opponent bowlers must vary him.

However, the left-handed batsman will face a different challenge this time around the tournament will be played in UAE due to the COVID-19 crisis in India. The pitches over there are known to favour the spinners while the boundaries are also on the larger side. Nevertheless, Pant will be accompanied by the likes of skipper Shreyas Iyer, Shikhar Dhawan, Prithvi Shaw and Shimron Hetmyer which makes DC a force to reckon with.

(The above story first appeared on LatestLY on Aug 02, 2020 07:36 PM IST. For more news and updates on politics, world, sports, entertainment and lifestyle, log on to our website latestly.com).