Former England captain Kevin Pietersen said that he is running out of adjectives and superlatives to describe the swashbuckling performances of Rajasthan Royals opener Jos Buttler in the ongoing IPL 2022. 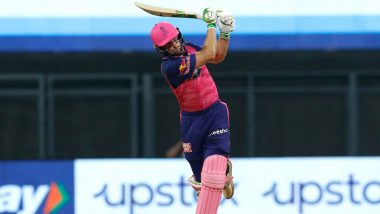 Pune, April 26 : Former England captain Kevin Pietersen said that he is running out of adjectives and superlatives to describe the swashbuckling performances of Rajasthan Royals opener Jos Buttler in the ongoing IPL 2022. Buttler has been in blazing form, slamming three tons against Mumbai Indians, Kolkata Knight Riders and Delhi Capitals to make 491 runs in seven innings at an average of 81.83 and strike rate of 161.51 to be the leading run-scorer of the tournament. IPL 2022: Chennai Super Kings Coach Stephen Fleming Feels MS Dhoni's Best Time to Come out for Batting is from 15 Overs Onwards.

"We are running out of adjectives and superlatives. The TATA IPL is made incredible by the innings like these. The spectators love this, we love this, everybody in the studio loved this. I mean some of the shots he played you can't buy them. You can't practice that (because) no one sells it," said Pietersen on Cricket Live show on Star Sports. "You either have it or you don't. He's (Buttler) such a fine talent and in such a sublime form. When he starts to strike like that sometimes you've just got to say you know what, this guy is so good. He took his time and capitalised," added Pietersen.

In Rajasthan's last match against Delhi Capitals at Wankhede Stadium, Buttler yet again set the stage on fire, slamming nine fours and as many sixes in a 65-ball 116 to take Rajasthan to 222/2. With Rajasthan set to face Royal Challengers Bangalore at MCA Stadium in Pune on Tuesday, Pietersen has backed Buttler to produce more swashbuckling performances in the tournament. Gujarat Titans vs Sunrisers Hyderabad Betting Odds: Free Bet Odds, Predictions and Favourites in GT vs SRH IPL 2022 Match 40.

"Jos did an unbelievable job against Delhi Capitals (in the previous game). I am sure he'll continue to do so because when you're in this kind of form in the tournament, you'll just bat and bat and bat, especially when the wickets are this good. So, I don't expect him to change the way he plays." India leg-spinner Piyush Chawla was in agreement with what Pietersen said of Buttler's belligerent run with the bat. "We are only halfway through the tournament and he's already scored 490-odd runs. Generally, people score that many runs in an entire season. He's batting extremely well this season."

(The above story first appeared on LatestLY on Apr 26, 2022 05:14 PM IST. For more news and updates on politics, world, sports, entertainment and lifestyle, log on to our website latestly.com).