Ever since the inception of cricket, run-outs are one of the crucial aspects of the game and once again it proved to be a decisive factor in Mumbai Indians' loss against Punjab Kings in Match 23 of IPL 2022 here. 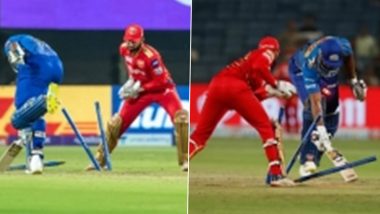 Pune, April 14 : Ever since the inception of cricket, run-outs are one of the crucial aspects of the game and once again it proved to be a decisive factor in Mumbai Indians' loss against Punjab Kings in Match 23 of IPL 2022 here. Chasing a total of 199 for victory, Mumbai lost the wickets of openers -- Rohit Sharma and Ishan Kishan inside the powerplay and were in trouble at 32/2 after 4.1 overs. But a big partnership between two youngsters -- Tilak Varma (36 off 20) and Dewald Brevis (49 off 25) brought Mumbai back in the game, taking them to 105/2 at the end of the 10th over at Maharashtra Cricket Association Stadium on Wednesday night. MI vs PBKS, IPL 2022: Dewald Brevis’ Four-Sixes-in-an-Over Assault Gets Sachin Tendulkar, Mahela Jayawardene Into the Middle.

At one stage, Mumbai needed 79 off the last 48 balls, which was a required rate below 10, and it typically favours the batting side in modern-day T20 cricket. But the five-time champions lost two quick wickets and exposed the lower order. MI gifted PBKS those two wickets, with Tilak Varma run-out in the 13th over following a mix-up with Suryakumar Yadav, and Kieron Pollard run-out in the 17th.

Yadav flicked a fullish delivery towards midwicket as Varma ran for a single. However, Yadav stood still and continued to watch the ball. Both batters almost reached the same end and by the time the senior Mumbai batter realised what had happened, it was too late for Varma to return as MI lost their fourth wicket.

There is an old saying in cricket -- "Never run on a misfield". But batters tend to forget that on most occasions. It was a slight misfield from Odean Smith at long-off, which had Pollard taking off for a second run. However, the West Indian couldn't return to the striker's end in time as Smith's recovery and the throw was brilliant and Pollard was out on 10. Rohit Sharma Completes Milestone of 500 Fours in IPL.

Despite two run-outs, Suryakumar Yadav, Mumbai's last recognised batter on the day, continued the charge from his end and hit two successive sixes off Vaibabh Arora. But, it was not enough as Yadav got out in the 19th over of the chase and eventually Mumbai Indians were restricted to 186-9 in 20 overs, losing by 12 runs. It was the fifth-successive loss for the five-times champions Mumbai Indians as they remain the only winless side in the ongoing IPL 2022 season.

Speaking after the game, skipper Rohit Sharma said the two untimely run-outs harmed his team's chances. "I thought we played the game pretty well and came pretty close towards the back end of our batting innings. It's just that a couple of crucial run-outs there were not needed, but that happens. At one stage we were cruising through and keeping up with the run rate as well, but in the end, we couldn't hold our nerves. Credit to Kings with the way they bowled at the back end," said Rohit. Mumbai Indians will take on Lucknow Super Giants in the afternoon game at the Brabourne Stadium in Mumbai on April 16.

(The above story first appeared on LatestLY on Apr 14, 2022 05:27 PM IST. For more news and updates on politics, world, sports, entertainment and lifestyle, log on to our website latestly.com).