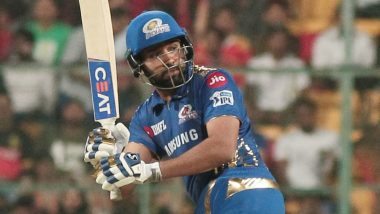 Mumbai Indians finally register their first victory on UAE soil and that too in an emphatic manner. Rohit Sharma and Jasprit Bumrah were absolutely phenomenal as MI beat Kolkata Knight Riders by 39 runs at the Sheikh Zayed Stadium in Abu Dhabi. With this, the Men in Blue & Gold have also opened their account in the team standings. Chasing 196 for victory, the Dinesh Karthik-led side never looked in the hunt as they kept losing wickets at regular intervals. Big-hitters like Andre Russell and Eoin Morgan failed to make an impact as Kolkata felt well short of the required total. KKR vs MI Highlights IPL 2020 Match 5.

Earlier in the game, Dinesh Karthik won the toss and invited Mumbai to bat first. With Quinton de Kock dismissed in the second over, the decision seemed impeccable at first. However, skipper Rohit Sharma joined with Suryakumar Yadav, and the two dashers demolished the KKR bowling line-up. The former was dismissed after scoring a fiery 47, but the Hitman carried on and scored 80 runs. Some late flourish by Saurabh Tiwary and Hardik Pandya helped Mumbai post 195-5 which eventually proved to be enough. Meanwhile, let’s look at the stat highlights of the game. KKR vs MI IPL 2020 Match 5: Mumbai Indians Top Team Standings After 49-Run Win.

# This was MI’s 20th victory over KKR, most for IPL team against an opposition in IPL.

# Kolkata Knight Riders lost their opening game for the first time since 2012.

With this triumph, Mumbai Indians have replaced Rajasthan Royals at the pinnacle of the team standings. Rohit Sharma and Co will next lock horns with Virat Kohli’s Royal Challengers Bangalore at the Dubai International Cricket Stadium on September 28. On the other hand, the Knight Riders will search for their first win against Sunrisers Hyderabad on September 26 at the Sheikh Zayed Stadium in Abu Dhabi.

(The above story first appeared on LatestLY on Sep 24, 2020 12:32 AM IST. For more news and updates on politics, world, sports, entertainment and lifestyle, log on to our website latestly.com).