KL Rahul Thanks Rohit Sharma! KXIP Skipper Reveals Mumbai Indians Captain to Be His 'Inspiration' Behind Record-Shattering Century vs RCB in Dream11 IPL 2020 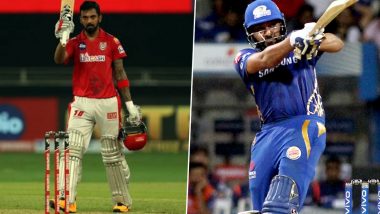 “Thanks Ro, took inspiration from your last innings,” the dasher commented. For the unversed, Rohit played a match-winning knock against Kolkata Knight Riders just a day before Rahul’s century. Batting first at the Sheikh Zayed Stadium in Abu Dhabi, the opener toiled the likes of Kuldeep Yadav and Pat Cummins, scoring 80 off just 54 balls. Thanks to his knock, the four-time champions posted 195/5 and went on to win the game by 49 runs. Notably, Rahul was dismissed for just 21 in Punjab’s first match against Delhi Capitals. However, the 33-year-old’s astonishing batting display ‘inspired’ him and the RCB bowlers had to face the heat. Meanwhile, let’s look at how Rahul thanked Rohit. KL Rahul Reacts to KXIP’s 97-Run Win Over RCB in IPL 2020 Match; Hardik Panyda Replies.

Thanks Ro, took inspiration from your last innings 🤗

Well, these two batting stalwarts might have enjoyed each other’s last knocks. However, admiration will turn into fear when they lock horns on the field. Meanwhile, MI will next meet Virat Kohli’s Royal Challengers Bangalore in Dubai on September 28. On the other hand, Punjab’s next assignment is against Rajasthan Royals at the Sharjah Cricket Stadium on September 27.

(The above story first appeared on LatestLY on Sep 25, 2020 08:42 PM IST. For more news and updates on politics, world, sports, entertainment and lifestyle, log on to our website latestly.com).