Punjab Kings captain KL Rahul was the top run-scorer last season with 670 runs, but his approach bagged a lot of criticism. His strike rate was a tad below 130, which is way less than his T20I strike rate (142.19). However, PBKS batting coach Wasim Jaffer said that Rahul would be aggressive this season, which is a worrying sign for opposition teams. 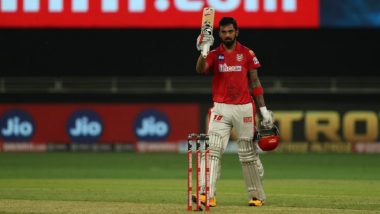 KL Rahul had a mixed time in the recently-concluded limited-overs series against England, and his approach in the upcoming VIVO Indian Premier League (IPL) 2021 is to watch out for. While the right-handed batsman failed terribly in the T20I series, he got his mojo back in ODIs. Punjab Kings (PBKS) fans would definitely like to see the in-form KL Rahul as the franchise is still searching for the elusive title. The opener was the top run-scorer last season with 670 runs, but his approach bagged a lot of criticism. His strike rate was a tad below 130, which is way less than his T20I strike rate (142.19). However, PBKS batting coach Wasim Jaffer said that Rahul would be aggressive this season, which is a worrying sign for opposition teams. IPL 2021 Schedule in PDF for Free Download: Get Indian Premier League 14 Venues, Full Time Table, Fixtures and Match Timings in IST.

In a conversation with the Times of India, Jaffer defended Punjab Kings skipper's approach last season. He explained that the lack of a reliable middle-order forced the Karnataka batsman to play the anchor's role the whole season.

"KL batted a little timidly last season. He probably batted deeper because there was not much batting after No. 5, and Glenn Maxwell was not firing. He took that responsibility on himself to try and stay at the crease and get the job done. This time around, everyone will see an aggressive KL Rahul for sure," Jaffer was quoted as saying by the TOI. PBKS Likely Playing XI in IPL 2021: Check Out Punjab Kings Predicted First Choice Line-Up for Indian Premier League Season 14.

Speaking of Rahul's lean patch in the T20I series, Jaffer said that any player could struggle at times, but it doesn't hamper his skills and class. "It can happen to any player. The more games he played, the better he became. Yes, he had a poor T20 series, but it did not make him a bad batsman. He has scored centuries in all three formats and knows his game better than anyone else. In the ODIs, he showed why he is such a special player," the former Indian batsman further opined.

Punjab Kings bagged services of Dawid Malan, Shahrukh Khan, Moises Henriques, etc. in the IPL 2021 auction event, and their middle-order looks much more stable now. This gives a licence to Rahul, Mayank Agarwal and Chris Gayle to fire in the top order. Moreover, the inclusion of Aussie duo Jhye Richardson and Riley Meredith has strengthened the bowling department.

Jaffer also reckons that the side is much more stable this season. "This is a much more balanced side than last year. We lacked bowlers who can back Mohammed Shami. In Jhye Richardson and Riley Meredith, we have got two pacers who can bowl quick," he said. Meanwhile, Punjab Kings kick-start their IPL 2021 campaign with a match against Rajasthan Royals on April 14 at the Wankhede Stadium in Mumbai.

(The above story first appeared on LatestLY on Apr 01, 2021 11:28 AM IST. For more news and updates on politics, world, sports, entertainment and lifestyle, log on to our website latestly.com).