KXIP vs KKR, IPL 2019 Match 52, Key Players: KL Rahul, Andre Russell, Chris Gayle And Other Cricketers to Watch Out for at PCA Stadium 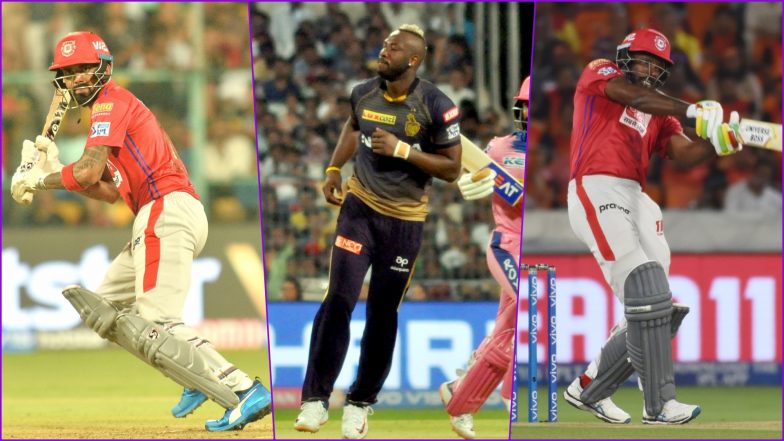 In the 52nd match of the Indian Premier League (IPL) 2019, it will be Kings XI Punjab (KXIP) hosting Kolkata Knight Riders (KKR) on May 3. The match will be played at PCA IS Bindra Stadium in Mohali, Chandigarh. Both the teams badly coming into the match; however, a loss for KKR tonight would mean extinguishing their only chance to qualify for the IPL 12 Playoffs.

The last time the teams met, it was a high-voltage affair where Kolkata won the match by 28 runs, after posting 218/4 on the board. In their reply, both KL Rahul and Chris Gayle failed to capitalise on their form, and the team eventually lost steam in the climax, despite late cameos by David Miller and Mandeep Singh. As the clock ticks away for the contest, we bring you a list of 5 key players to watch out for in KXIP vs KKR, 52nd IPL 2019 match. KXIP vs KKR Head-to-Head Record: Ahead of IPL 2019 Clash, Here Are Match Results of Last 5 Kings XI Punjab vs Kolkata Knight Riders Encounters!

KL Rahul has struck form at the right time, and it seems that has benefitted KXIP franchise the most. Rahul has scored 520 runs in 12 matches he has played this year, in which he has scored five half-centuries. With a must-win situation looming over, Punjab would be looking towards Rahul to fire in both the remaining matches to strengthen their Playoffs’ chances.

One of the most impactful players this season (overall), Andre Russell has single-handedly changed the outcomes of the matches on his given day. Come Friday, much of KKR’s qualification chances in the Playoffs will depend on how Russell plays against KXIP. In their last match he scored 48 off 17 balls; will he take his team to the IPL Qualifiers?

The ‘six-hitting machine’ hasn’t been left too far behind in the tally of runs. In 11 games that he has played, Chris Gayle has scored 448 runs at an impressive strike rate of 161+ Gayle would be eyeing to carry his form in the match against Kolkata and the make the most of the home conditions. It will be delighting to see if Mohali witnesses a Gayle-storm tonight!

Kolkata Knight Riders would be banking on the spin masterclass of Sunil Narine to stop the juggernauts of Chris Gayle and KL Rahul. Also, Narine who has has been pushed down the order will be eyeing to prove his worth with the willow too. Narine has blown hot-and-cold this season so far; with a Playoffs’ spot at stake, this will be the right time to amend things.

The fast bowler has played a key role in KXIP’s campaign this season. With 16 wickets in 12 matches, Shami has been their top wicket-taking bowler this IPL. With the likes of Chris Lynn, Shubhman Gill, Andre Russell in KKR’s lineup, Shami will have his task cut out to ensure his team makes to the Playoffs or not. How much does he fare against the mighty batting lineup will determine how much of a chance does KXIP have to qualify!

The hosts, Kings XI Punjab, are on the 7th spot of the IPL 2019 Points Table after winning five and losing seven matches this season. On the other hand, Kolkata Knight Riders are on the 6th spot in the league standings with the same number of wins and losses, only with a better Net Run Rate (NRR).

It will be intriguing to see which team will solidify their chances and which team will join RCB bandwagon in the IPL 12. Stay tuned to LatestLY for all the latest updates about Indian Premier League (IPL) 2019.