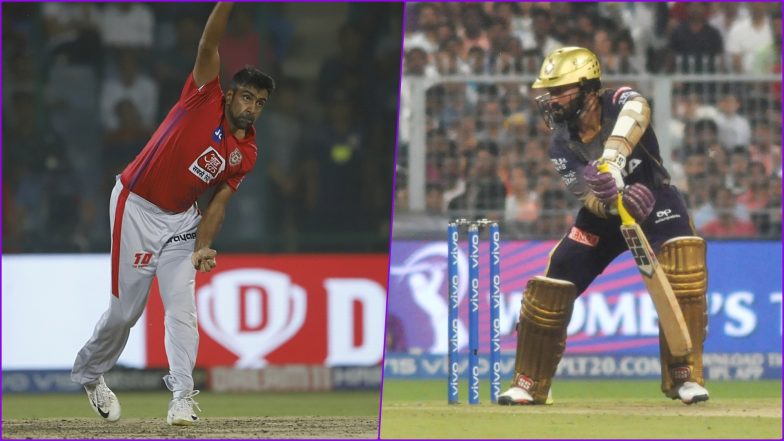 Kolkata Knight Riders (KKR) and Kings XI Punjab (KXIP) find themselves in a desperate situation where a defeat will knock them out of the VIVO Indian Premier League (IPL) 2019. A morale-boosting win over Mumbai Indians snapped a string of losses for Kolkata who had forgotten how to win games. After a bright start, a slump of form failed to derail their campaign, but a timely win seemed to have given them a confidence booster. For Punjab, they have lost four out of their five games and yet another season with group stage exit could be a harsh reality. They have a poor head to head record against Kolkata with just 8 wins in 24 games while Kolkata has 16 wins under its belt. Lets us have a look at how their last five games panned out. KXIP vs KKR, IPL 2019 Match 52 Preview: Kolkata Knight Riders Look to Continue Winning Run Against Kings XI Punjab.

Robin Uthappa and Nitish Rana went hell for leather as Kolkata finished with 218/4 batting first. The two batsmen ended with the 60s and were ably supported by Andre Russell who contributed a 17 ball 48 that included five sixes. Punjab never could reach a phase in their response where they looked like chasing down the massive score. David Miller did hit a fifty, but the visitors went down by 28 runs.

Another huge total posted by Kolkata on a flat track of Indore with the side reaching 245/6 in twenty overs. Sunil Narine was the star of the show for KKR smashing 75 runs off 36 balls along with a fifty from Dinesh Karthik. It was a bad day for the bowlers on the whole with Punjab too reaching 214 but were never in the game.

The Kolkata Knight Riders would count themselves unlucky to lose a game after scoring 191 runs in their quota of twenty overs. As rain played spoilsport, the revised total was set at 125 needed from 13 overs. The visitors reached the total with little trouble with Chris Gayle to scoring with 62.

Chris Lynn’s 84 went in vain as his side failed to chase down 168 needed to win the contest on away soil at Mohali. Mohit Sharma and Rahul Tewatia were the pick of the bowlers for the hosts as they grabbed two wickets each to restrict KKR to 153.

An easy chase for Kolkata who were led by skipper Gautam Gambhir’s unbeaten 72 taking his side to an 8 wicket home. The home team reached the target of 171 in under 17 overs which tells us about the dominance they enjoyed over the Punjab bowling unit. Earlier Umesh Yadav picked up four wickets to restrict Punjab to 170 on a good batting wicket.

In terms of personalities, Kolkata look the more dominant team and this might work in their favour against Punjab in a must-win game.