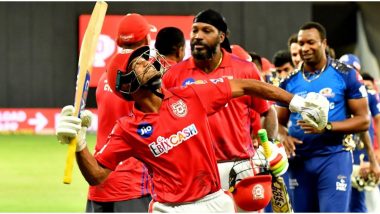 Cricket is known to be game of great uncertainties, and the match between Kings XI Punjab and Mumbai Indians proved why. What we witnessed at the Dubai International Cricket Stadium was the MOTHER OF ALL CONTESTS as the highest quality of cricket was on display! For the very first time in Indian Premier League (IPL) history, a game advanced to the Second Super Over, and it was KL Rahul’s KXIP who eventually came on top after 43.4 overs of the mind-boggling contest. Still, it won’t be fair to say that Mumbai Indians lost as they played like true champions in the greatest T20 match ever. MI vs KXIP Highlights Dream11 IPL 2020.

I wonder what New Zealand and England players would be thinking after watching this game. After all, the rule of second super over was introduced only after their tied encounter in the 2019 World Cup finals. Earlier, the team which smashed more boundaries was adjudged the winner after the tied super over. The controversial law, however, was changed and people in KXIP camp should thank their fortune. MI vs KXIP Stat Highlights IPL 2020: KL Rahul Crosses 500 Runs in Season.

The encounter was riding on a roller-coaster ever since MI opted to bat first. They got off to a horror start as skipper Rohit Sharma and Suryakumar Yadav got out cheaply. Nevertheless, the defending champions powered to 176/6 thanks to Quinton de Kock, Krunal Pandya, Nathan Coulter-Nile and specially Kieron Pollard. Chasing the competitive total, KL Rahul continued his anchor role as KXIP were favourites for the major part. Chris Gayle Leads KXIP to a Stunning Win in Second Super Over Against Mumbai Indians in Dream11 IPL 2020.

Jasprit Bumrah, however, dismissed the KXIP skipper and the match eventually got tied, advancing to the Super Over. Bumrah and Shami gave just five runs each for their respective Super Overs and the game went to the second one-over eliminator.

Kieron Pollard helped MI post 11 in the second one-over eliminator but KXIP crossed the line with two balls to spare. Celebrations might have begun in the KXIP camp but at the end, cricket was the winner as we saw the greatest T20 match ever. If you really don’t agree with me, let’s look at some factors which justify the fact.

You don’t lose till your opponent wins – this is the learning from this contest. We often see down shoulders and negative body language when a team is approaching loss. However, that wasn’t the case in this game at all. Needing two runs of the last delivery in the game, Chris Jordon ran for a single but got run-out by Kieron Pollard. Similarly, Quinton de Kock also failed to take two runs off the last delivery in the first super over as KL Rahul’s presence of mind got better of him. Literally, nothing can separate both sides’ performance but the game demands for a winner and the pendulum swung Punjab’s way.

Do you know what’s the most beautiful thing about time? It Changes! There was a period when India had a reputation of not producing tearaway fast bowlers. However, that’s history now and one can see Jasprit Bumrah and Mohammed Shami’s stellar spell to verify the fact. Yorker is indeed one of the most difficult delivery as if the bowler misses the mark even by an inch, it will convert into a full toss.

However, Bumrah and Shami were on-point as they delivered where they intended too and the result is in front of us. Not to forget the spells of Chris Jordon and Trent Boult who also nailed the yorker on multiple occasions.

Just above we mentioned how brilliantly the bowlers performed. Still, 352 runs were scored in the first 40 overs with a run-rate of 8.80 and that’s because of some stupendous striking. The way Quinton de Kock and Krunal Pandya went for the big shots despite the crunch situations was commendable. For Kieron Pollard, however, it was a regular day at the office as he yet again unleashed mayhem in the end overs. From Punjab, skipper KL Rahul played glorious shots all over the park, proving you can do well in T20s with orthodox shots. The cherry on the cake, however, was put by Chris Gayle who smashed Trent Boult for a straight six in the second super over to put the game in KXIP’s kitty.

Remember how Nicholas Pooran defied gravity in Sharjah and saved six runs? Well, he seems to have shared his powers with Mayank Agarwal as the Indian international flew to save the ball going over the ropes. The incident took place in the last ball of second super over where Pollard played a big shot which had six written all over it. However, Agarwal gave his best and saved four vital runs for his side.

Speaking of saves, Nathan Coulter-Nile also made a sensational stop earlier in the match, helping Mumbai Indians in taking the game to the one-over eliminator. Chris Jordon flicked the ball on the leg side with an aim to get the boundary. However, Coulter-Nile stretched full length and almost grabbed a screamer. In records, it will go down as a dropped catch but the half-chance was created only due to the Australian’s effort.

As mentioned above, the real winner was the game of cricket. Mumbai Indians must be gutted after losing the game despite the efforts. However, instead of feeling sorry about the result, they were seen chilling out with KXIP players, teaching the budding cricketers about sportsmanship. Well, this is the beauty of sports. Instead of any hatred or grudge, it instils respect for opposition after a hard-fought battle.

With this Kings XI Punjab keep their hopes of making to the IPL 2020 playoffs. Other teams must beware as these underdogs can do severe damage to their campaign. They will next take the field against current table-toppers Delhi Capitals at the Dubai International Cricket Stadium on October 20. On the other hand, Mumbai Indians don’t have much to worry about as they stay at the second position in the team standings. They, however, will want to go back to winning ways against Chennai Super Kings against Sharjah Cricket Stadium on October 23.

(The above story first appeared on LatestLY on Oct 19, 2020 02:34 AM IST. For more news and updates on politics, world, sports, entertainment and lifestyle, log on to our website latestly.com).