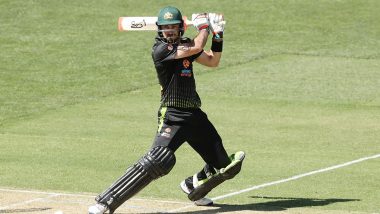 Australia will look to build on their 64-run win in the third match when they play New Zealand in the fourth T20I at Wellington. New Zealand vs Australia 4th T20I match will be played on March 05 (Friday). Kane Williamson’s men currently lead the five-match series 2-1 and can clinch it with a win in the fourth match. For Australia, it is a do-or-die clash for a defeat will end their hopes of a series win. Meanwhile, fans looking for the live telecast, live streaming online and other match details for the NZ vs AUS 4th T20I match should scroll down for all relevant information.  Mohammed Siraj Accuses Ben Stokes of Abusing Him During IND vs ENG 4th Test 2021, Day 1; Opens Up About Virat Kohli’s Confrontation With English All-Rounder (Watch Video).

Aaron Finch’s men kept themselves alive in the series with a 64-run victory in the third match after consecutive defeats in the first two. They were beaten by 53 runs in the first T20I and lost by four runs in the second but came alive in the third match with their batsmen firing and the bowlers picking regular wickets. Finch scored a fifty while Glenn Maxwell smashed a 31-ball 70 to power the visitors to 208/4 before Ashton Agar ran through the New Zealand batting and picked six wickets to bundle them for 144 runs. Wasim Jaffer, Delhi Capitals & Other Netizens Praise Axar Patel For Scalping Four Wickets in First Innings During IND vs ENG 4th Test 2021, Day 1 (Check Reactions).

New Zealand vs Australia fourth T20I match will be played at the Westpac Stadium in Wellington. The game will be held on March 5 (Friday) and it is scheduled to begin at 11:30 am IST (Indian Standard Time).

Unfortunately, the fans in India will not be able to watch the live telecast of the New Zealand vs Australia 4th T20I match on TV as there are no broadcasters available for the AUS vs NZ T20I series.

Fans can get the live score updates of New Zealand vs Australia 4th T20I match 2021 on FanCode App. Fans will have to pay a nominal fee to watch the live-action. The details of the same will be available on the app.

(The above story first appeared on LatestLY on Mar 05, 2021 09:59 AM IST. For more news and updates on politics, world, sports, entertainment and lifestyle, log on to our website latestly.com).