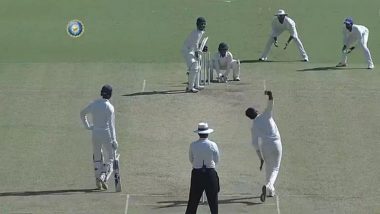 New Delhi, October 18: The 2020-21 Indian domestic cricket season, which is expected to comprise only the men's national championship for Ranji Trophy and possibly the senior women's tournament, will be played in bio-bubble due to Covid pandemic, and matches will be organised in cities that have a minimum of three grounds, sufficient hotels, and good hospitals for emergency. No spectators will be allowed at the grounds.

The format of the Ranji Trophy will change from four groups, which was the format last season, to a zonal basis. This means teams falling under each of the six zones will gather in one city for the league matches before the knockout round begins. The same format will be replicated in the senior women's tournament, if it is organised at all. Ranji Trophy 2020-21: Ashok Dinda to Play for Goa in Upcoming Domestic Season.

This was decided at a virtual meeting of the Apex Council of the Board of Control for Cricket in India (BCCI) on Saturday, said a source. "The change in 2020-21 domestic season has been proposed due to Covid-19 because no one knows what is store for all of us. Still, we have decided tentatively to have only Ranji Trophy, starting in January, and maybe the senior women's tournament. No starting date has been finalised but it will be played early next year. This will, however, depend on the prevailing Covid situation in January," a reliable BCCI source told IANS.

"The format of the Ranji Trophy will revert to an old one, and matches will now be played in bio-bubble and in one city in each zone, so that teams and match officials have to travel minimal distances, between hotels and grounds. The condition for choosing cities is that they should have a minimum of three grounds and good Covid hospitals for emergency. No spectators will be allowed at the grounds," explained the source.

A committee will be constituted for this purpose. "This committee will travel to all the probably cities and check the arrangements and then submit a report. This will be a kind of recce of the match-hosting cities," he said. "The junior level tournaments are out of question, at least till March-April. We will discuss junior tournaments in maybe in February or March," he said.

The source said that India's international cricket schedule and the 2021 IPL were taken into account while discussing the domestic season. "Since there is ICC T20 World Cup next year and a series against England, we will have to see players in action in Ranji Trophy. Then, there is also the 2021 IPL that would probably start in March or April. If the pandemic subsides then the next edition of the IPL would be played in India," he said.

In normal circumstances, the domestic season might have begun in August. Last year, it began on August 17 with the Duleep Trophy while the Ranji Trophy began on December 9. Thirty-eight teams compete in Ranji Trophy and they are divided into six cricketing zones -- east, west, north, south, central, and the newly created north-east zone.

Since cricketing infrastructure is an issue in the north-east, Pondicherry has offered to host the matches of the north-east zone, which comprises Meghalaya, Manipur, Mizoram, Sikkim, Nagaland and Arunachal Pradesh.

"Cricket Association of Pondicherry has six good grounds and it has offered to host the Ranji Trophy matches for the Plate group. Last year, the Plate Group comprised teams from Goa, Puducherry, Chandigarh, Meghalaya, Bihar, Nagaland, Manipur, Mizoram, Sikkim, and Arunachal Pradesh. But this time the Plate Group may not be in this shape at all," said another source.

Organising domestic cricket will entirely depend on the Covid related situation and as per to the government/medical guidelines at the time.

"Another problem that could arise is in a situation when the city hosting matches suddenly sees a jump in Covid cases and a lockdown is imposed by the state government. You will obviously have to stop the matches. The question then will be: For how long can you suspend matches of one zone while matches in other zones would be on?" he said.

These and many others questions would be answered as the new year draw closer. At the moment the only worthwhile cricket action is on in the United Arab Emirates -- the IPL.

(The above story first appeared on LatestLY on Oct 18, 2020 10:50 PM IST. For more news and updates on politics, world, sports, entertainment and lifestyle, log on to our website latestly.com).