Sunrisers Hyderabad’s Rashid Khan’s performance against Kolkata Knight Riders yesterday at the Eden Gardens during the qualifiers 2 of the IPL 2018 has garnered heaps of praises from various Indian cricketers. 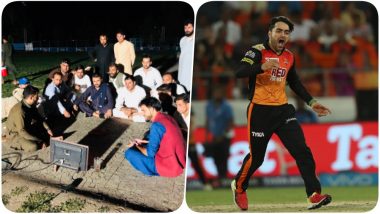 Sunrisers Hyderabad’s Rashid Khan’s performance against Kolkata Knight Riders yesterday at the Eden Gardens during the qualifiers 2 of the IPL 2018 has garnered heaps of praises from various Indian cricketers. Even Rashid Khan’s countrymen back in Afghanistan are keeping a tab of his performance in the IPL 11. Rashid’s Afghani teammate Karim Sadiq too lauded Rashid for his performance via a couple of tweets.

Karim took to Twitter to share the picture of him watching the match in an open space with his friends and a sheep in their company. The caption of the picture read, “Watching @rashidkhan_19 match brilliant performance in all 3 department good luck for big final 👌🏼🐅🇦🇫.”

Irfan Pathan saw the post and responded to the same. He replied to the tweet and wrote, “This is brilliant.”

Rashid Khan proved to be extremely vital against for the team. He made 38 runs from 10 balls and snapped 3 wickets of Chris Lynn, Robin Uthappa and Andre Russell. Rashid also got a couple of important catches and won the Man of the Match award. Posting winning the gong, he dedicated the same to the Afghanis who lost their lives while watching a cricket match in Jalalabad a few days ago.

After winning the match, SRH captain Kane Williamson hailed the effort of Rashid and said, “Someone like Rashid is the perfect example of that. Outstanding talent, but a team effort. Lot of the guys chipped in, great team fighting effort which is the attitude we want to see.” SRH will now face the Chennai Super Kings on May 27, 2018, at the Wankhede Stadium, Mumbai.

(The above story first appeared on LatestLY on May 26, 2018 11:00 PM IST. For more news and updates on politics, world, sports, entertainment and lifestyle, log on to our website latestly.com).